The Fate of the furious marks the eighth installment of this outrageous series. 2015’s Furious 7 was one of the most anticipated movies in the franchise due to the passing of series star Paul Walker. The tragedy brought together fans for a beautiful conclusion to the character with the film’s ending. It could be said that this should have marked the end of the franchise, but what I can say is that Fast 8 brings in a story worth telling and is a worth while entry in the franchise.

The story this time around is one that I did not expect. The movie opens with one of my now favorite Dom Toretto scenes. The whole first 15 minutes was a throwback to the street racing side of the series and shows why Dom is such a good character. This near-death experience to win this race was to teach someone a lesson and to help earn a man’s respect. This scene was much needed at the beginning of the film to build up Dom as the guy we loved before Cipher enters the film as the main villain. She tracks down Dom and blackmails him into doing her dirty work.

When the trailers released for the film, I had a theory that Dom would betray his family in order to protect the O’Conners in some way. In hindsight, that wouldn’t have been as rewarding in relation to what we got. Dom goes against his family to protect Elena ( Fast 5 ) and his newly born son. This plot point was worth the series’ continuation. When Letty was reintroduced to the series in Fast 6, Elena was essentially a loose end and didn’t have the closure I would have liked. This corrected a problem I had with the series and made for a good arc in Dom’s never-ending desire to be a family man. The film has a good balance between Dom struggling to help Cipher and the side story of the family’s attempt to take down Dom.

As always in the Fast and the Furious, Vin Diesel is the heart of the franchise. This time around, his performance as Dom takes a good turn. It is a welcome edition to see Dom fear his enemy as you sympathize with him when he has to go against his family. At times he may seem cheesy, but that’s why I love Diesel in the role. To move away from the star of the franchise, lets talk about the true show stealers of the film, Dwayne “The Rock” Johnson and Jason Statham. The two deliver such a strong buddy cop rivalry and the duo steals the show everytime they are on screen. The talks of a spin off staring Johnson and Stathem could possibly lead to one of the series’ best movies yet. The franchise has a lot of characters to play with, why leave them all in one film? Another show stealer (as always) is Tyrese Gibson as Roman. Typically in movies, I dislike the loud mouth comedic relief, but somehow Tyrese delivers such a likable character whose comedy for the most part always lands. Outside of Dom’s family, other highlights include Kurt Russel’s mysterious character “Mr. Nobody,” who is begging for more of an origin, and Charlize Theron as the Villian, who delivered a menacing threat to the team.

Unfortunately, some of the cast members missed the mark in this one. The likes of Letty, Tej and (after having to look up her name ) Ramsey simply fall short in this one. The characters are there for good reason, but i simply wished that they expressed more emotion with Dom betraying them. These members of the team seemed as if nothing went wrong in this film and that they were chasing some baddie.

Speaking of baddies, Cipher’s red headed sniper guy was built up to be a strong right hand man, but has barely anything to do with this movie. Another let down was Scott Eastwood as Little Nobody. At one point in the movie, I had realized what the studio was trying to do. They wanted some young pretty boy to fill in for Paul Walker’s absence. I like the concept, but the character simply didn’t have enough screen time for it to be anything.

You would think this far into the series that the action wouldn’t be able to top the films before it. I can gladly say that the action in this movie somehow tops its predecessors. The opening of the film delivered an awesome car chase with Dom driving a car ready to explode. This brought laughter to the audience due to its absurdity. Speaking of absurdity, Hobbs and Shaw’s prison break was such a huge set piece and was again begging for that spin off.  The chase scene in NYC was such a joy to watch, with cars being controlled and basically raining through the skies while the team chases down Dom. The scene’s final set piece was essentially ruined by the trailers, but the submarine scene reminded me of a big action scene that you would see in a Marvel movie. You would think that this would be the best set piece of the film, but I disagree. The best action scene to me is Shaw carrying baby Brian while listening to Alvin and the Chipmunks Christmas don’t be late while taking down armed guards. 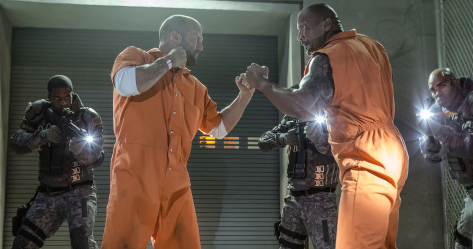 My hope is that the finish line is in sight for the franchise. The series needs that spin off with The Rock and Statham. That could be a few movies if done right. With that being said, we already know that the series will make its way to Fast 10 ( or what I would like for it to be called, ” FUR10US” [You heard it here first] ). In the last two movies remaining, I would love to see Cipher taken down, Mr. Nobody’s purpose to be revealed, and closure to Dom Toretto. My dream final scene for the franchise would feature a rebuilt Toretto home with everyone gathering around with a beer. This includes CGI Paul Walker for one final goodbye as the series is finally laid to rest….. until 2040 where we get a brand new series staring grown up Brian Toretto!

The Fate of the Furious still shows that the series hasn’t lost any speed. Its one of those movies that is so absurdly stupid, but really good at the same time. Its a story that felt personal to its fans while making it easy to follow for newcomers. Paul being left out was very unfortunate, but the series had more stories to tell. Lets just hope that the end is truly near before the series runs out of gas.

+ Hobbs and Shaw, the dream duo

+ Great call backs and cameos to prior films

Jacob Nelson is one of The Geekiverse’s newest writers. You can catch him reviewing Dragonball Super.