How Far Will You Go To Get Revenge?

Tales of Berseria takes place hundreds of years prior to the events of Tales of Zestiria. The story centers around a young woman named Velvet who’s world is plagued by an infliction known as the Daemonblight, a mysterious illness that turns normal people into daemons.

It is up to an organization known as the Exorcists, people who are able to wield powerful spirits known as Malakim, to get rid of the Daemonblight.  Tragedy and betrayal strike Velvet and turn her from a sweet loving girl into a mistress of cold and calculating pain. That is ultimately where the story begins. You play as the “bad” guy trying to undo whatever the Exorcists are doing in the name of revenge. That was what made this game so different from the rest of the “Tales of” series, and it definitely has a darker tone to it.  I felt terrible sometimes as Velvet and the rest of the gang destroy whole towns in order to get to one man, but it was the darkness of the game that drew me into it.

It’s very reminiscent of Tales of Vesperia and Tales of Xillia. It’s not a very open world, but it’s linear and at certain points you actually have freedom to go wherever you want. Using the Van Eltia, a pirate ship, you can go back to areas you’ve already explored. They also introduced Entro Bottles and Inoph Bottles. The bottles allow you to warp out of dungeons or warp to different towns to complete those pesky fetch quests without the terrible toil of having to walk hours through areas.

Battling is almost the same as every other “Tales” game with some tweaks here and there. They introduce the Soul Gauge, which allows you to keep using artes until the Soul Gauge falls to zero. They also introduced the Blast Gauge, which allows the player to trigger special attacks which can be used in a pinch while trying to defeat a pesky foe. When battling it is imperative that you make sure you’re using the enemy’s weaknesses against them, and they make it easier than ever to switch out characters, just like in Tales in Zestiria. This game  has an added effect called Switch Blast, which will damage your enemies as you leave the battle. 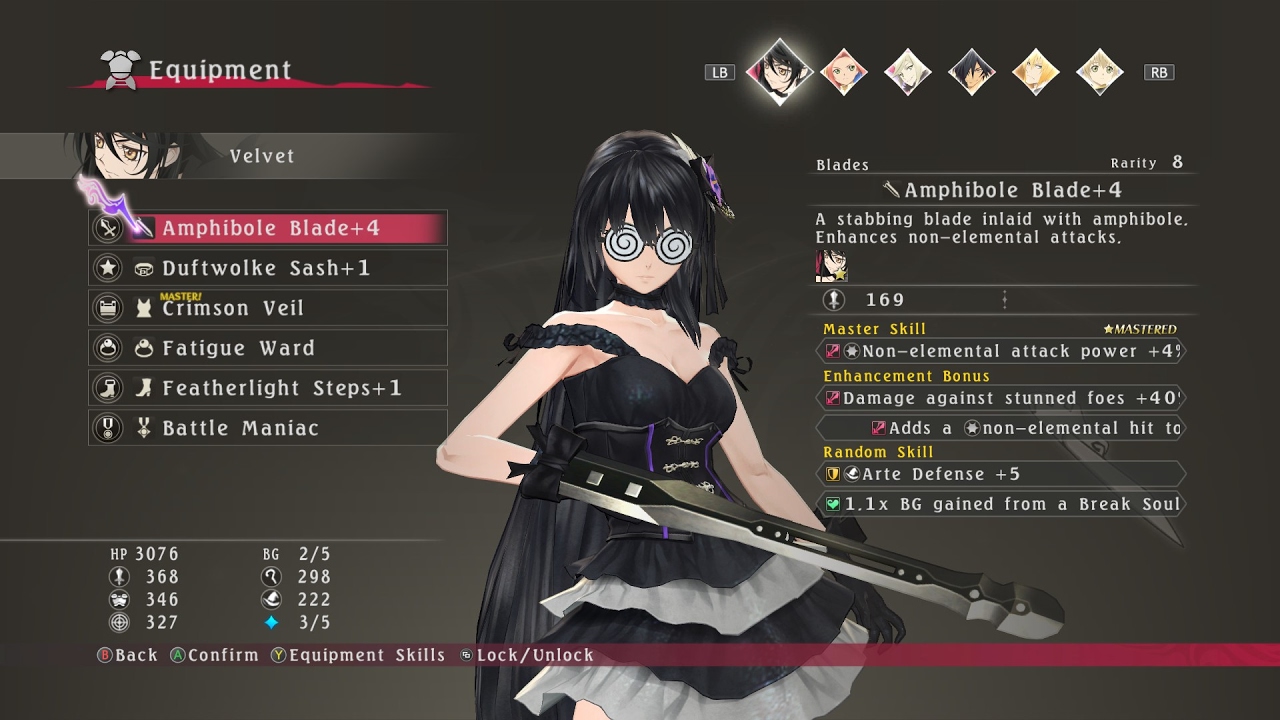 Gaining Skills is a throwback to Tales of Graces, where using different weapons and gear enough times will give you the abilities attached to that particular object. You can also improve the weapon by performing upgrades at shops. I highly suggest doing this because it could help if you’re having a tough time in a dungeon.

Cooking has never been easier, they added an auto cook feature that will automatically cook a dish for you after every battle. Also, depending on who cooks the dish, it will grant different effects for the next battle.

The addition of side missions was a nice touch, and opened a lot of story for different characters. It was interesting to learn about Edna’s brother, Eizen, and his whole back story. (Edna is a playable character from Tales of Zestiria.)  They also added tons of mini- games that had different degrees of difficulty. Completing certain mini-games will unlock new costumes for our anti-heroes. (My favorite was the Waiter Mini-Game.)

The graphics for Tales of Berseria are top-notch, and were worth the wait. I loved standing on one of the cliffsides and watching the waves crash against the rocks. I also turned the camera skyward and marveled at the clouds rolling by. It gave the game so much life that I enjoyed every bit of it.

The music wasn’t anything special and easily forgotten, but the voice-acting, (I played my game in English) was amazing and brought so much to the game. One character in particular, Magilou, who I actually hated at the start of the game, I came to grow very fond of, with her many expressions.

A couple of things I will say about this game is that the female representation is very strong. Velvet is as cold and hard as steel; Magilou, who I thought was going to be a ditzy, turned out to be wise beyond her years; and Eleanor who does her duty, blindly ends up questioning those who are higher-up, and finds her own reasons for fighting. The only thing I didn’t like was Velvet’s outfit. I think there’s ways to be sexy without showing a ton of cleavage, but that’s just me. (I did change her outfit when I received the option.) and I know that they are trying to do a little fan-service by making their females appeal to a male audience, so I won’t hold it against them.

A couple topics I will address is the censorship that they did to the American version of the game. It happens a little after the beginning and I went on YouTube and watched the different version. Honestly, I can see why people would get mad. It’s not that bad of a scene to be censored, in my opinion, and to avoid spoilers I won’t say what it is. You can watch the uncensored video here: Censored Vs Uncensored . They definitely turned down the violence in the game by censoring it. Another topic is the subtitles they used for certain scenes. A lot of the time it seems they were hastily done, and I caught myself more than once stopping and realizing that whole sentences didn’t make sense, and were different than what the voice-actors were saying.

All in all, I did enjoy Tales of Berseria. The graphics, the characters, and the story were very well done, and I enjoyed it more than Tales of Zestiria. I also found myself, more than once, trying to remember what happened in Tales of Zestiria. I wish that they had bundled both of the games together, as once you beat Berseria it prompts you to continue into Zestiria. That would have been such an amazing way to tie to the two games together. But alas… it didn’t happen. I  wasn’t a huge fan of the ending, but it’ll have to do since they want you to play Zestiria, and maybe … just maybe, Berseria will make me like Zestiria more, but I really don’t feel like playing it again.

+Playing as the Anti-hero

What did you think of Berseria? Do you think it is better than Zestiria? Comment down below!

Until next time, Cheers!!

Sam Budzinski is still toiling through the enormous game Legend of Zelda: Breath of the Wild and is loving every second. She is playing it on the Wii U.

Tales of Berseria was reviewed on PS4. It is also available on PC through Steam.