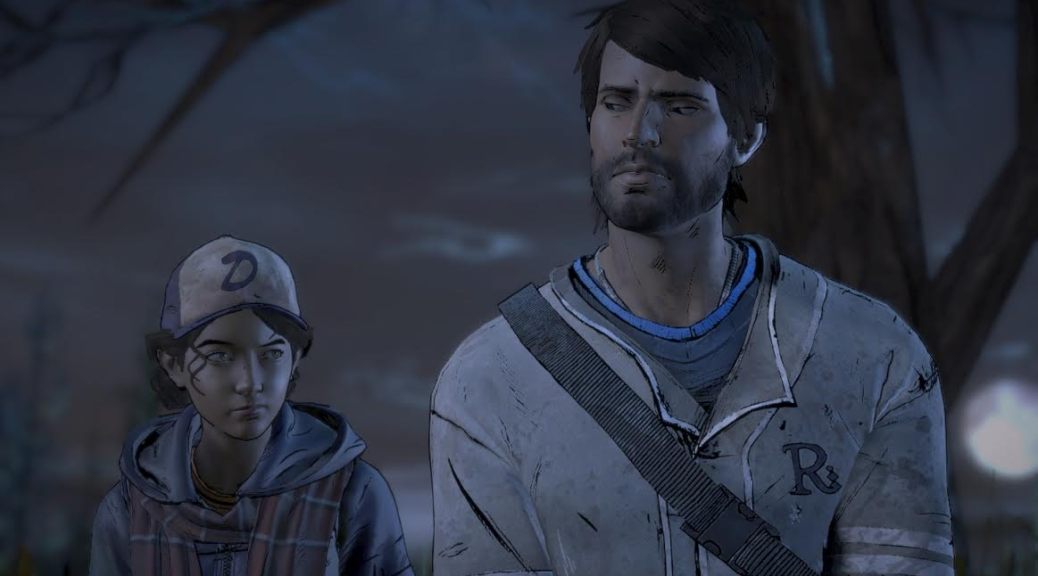 Telltale’s premiere franchise is back and better than ever!

Telltale “knocks it out of the park” with their third full season of The Walking Dead, this season subtitled “The New Frontier.” In our review, we are going to touch on bits from each of the first 3 episodes of this 5 part season.

The New Frontier stars Javier Garcia, a former professional baseball player who is now living out the end of the world. The three episodes have followed a similar structure, which is unlike any that we have seen in the previous Telltale games. Each episode starts off with a flashback for Javy, either right before or after the zombie outbreak began. This serves the purpose of adding depth to an already rich character and helps the player to understand the family struggles that Javy is dealing with.

Own the epic original season of Telltale’s The Walking Dead

Family seems to be the constant theme here, as we witness turmoil stemming from tragedy to questionable life choices in various sequences. What’s so masterful about this flashback is that it serves a true purpose that enhances the game’s value, as opposed to having it for dramatic effect (or filler time, for that matter). I was blown away at how well this setup actually worked, as often times in gaming, jumping around the timeline causes confusion.

After the Javy flashback, the episode joins the modern day story for a few chapters.

The perfectly timed, epic reveal of Clementine reminded me partially why I love this iteration of The Walking Dead so dearly. Clementine is one of my favorite gaming protagonists ever. Nary have we seen anyone quite like her in video game history, where we have been able to witness her early years as a young child in a hellish world, her assent into an independent life as a 10 year old trying to survive, and now the even stronger, more rugged Clem. Now 16 years old, Clem’s trust in humans has dissipated, as she has experienced heartbreak, betrayal, and everything in between. Of course, she is still wearing that iconic Arizona Diamondbacks-like baseball cap. The irony is that the hat has made it through all of the trials over the years. Nice touch, Telltale.

As I mentioned before, the story telling method is unique. After the modern day story runs its course for a few chapters, Clem gets a flashback chapter of her own, much like Javy’s. When I first heard that Clem would be featured but only playable in flashbacks, I was admittedly skeptical. After playing through these three episodes, I am happy to say how impressive the execution has been. The flashbacks have answered questions I didn’t know I even wanted the answers to, adding yet another layer of depth to Clem’s already extensive persona.

STAY ON YOUR TOES

The New Frontier is intense, dark, and totally unforgiving. Maybe I’ve just played too much of TWD over the years, but my character’s choices are so much more jaded and cut-throat. What’s more is that if you play The New Frontier on the same system you played The Walking Dead Seasons 1 and 2 on, you have the ability to carry your choices over from those playthroughs. The scary thing? They matter.

I am ecstatic to report that Telltale has finally polished their game engine, as this is the smoothest running game they have ever put out – and it’s not even close. From transitions between cutscenes and controlling my character to action sequences, they finally got it right. Gone are the days of clunky, slow moving action. I only wish this had been present for Batman: The Telltale Series. That’s not to say that the engine isn’t without its issues. An odd error kept popping up for me on the Xbox One but only during episode 3. From time to time, Javy’s backpack would be extended horizontally as far as the eye can see, which occasionally interrupted the game. However, it never slowed it down.

The New Frontier is quite possibly the best that Telltale has ever produced, which is saying a ton with the amazing stories set forth by the first two seasons of TWD. In fact, it’s one of the best stories we have received as gamers in recent memory and I predict that this will go down as a Game of the Year contender, provided episodes 4 and 5 hold up their end of the bargain.

+ Clementine’s reveal and growth as a character are unparalleled.

+ The weight of your decisions matters.

+ Flashback sequences are the best ever utilized in a game.

– Occasional but rare issues with engine are still noteworthy, but likely fixed with a patch.

The Walking Dead: The New Frontier Episodes 1-3 were reviewed on an Xbox One. They are also available for PC, PS4, and mobile devices. All pictures are from the Xbox One’s screenshot ability.

Other Telltale Game Reviews from The Geekiverse

Tales From The Borderlands