Today we got our very first tease of Emily Blunt as everyone’s favorite nanny when Disney released a still from the set of the upcoming film Mary Poppins Returns. 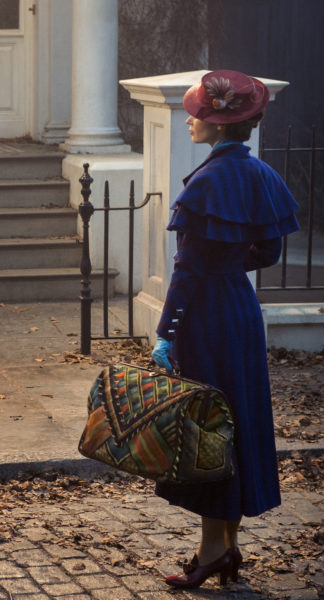 The film, which takes place in Depression-Era London (about 20 years after the original film), centers around the grown up Jane and Michael Banks and their children. As Michael is recovering from a family tragedy, Mary Poppins returns to Cherry Tree Lane, where she uses her magic to help Jane and Michael find the magic, joy, and wonder in life once again.

Own the 50th Anniversary Edition Blu-ray of Mary Poppins

And with a star studded cast, this film is already looking practically perfect in every way! Emily Blunt will take over Julie Andrews’s iconic role as the magical umbrella wielding nanny. Lin-Manuel Miranda (of Hamilton and Moana fame) will be playing the role of lamp lighter, Jack (a role similar to Dick Van Dyke’s Bert in the original), as well as helping to write some of the film’s new songs. The big names in the cast don’t stop there with other familiar faces such as Julie Walters, Meryl Streep, Colin Firth, Angela Lansbury, and, of course, Dick Van Dyke. There’s still no word if Julie Andrews will be appearing in the film… but we can still hope, right?

Principal photography only started on February 10th but this movie already looks supercalifragilisticexpialidocious!

Mary Poppins Returns is set to hit theaters on December 25, 2018.

Guardians of the Galaxy Coming to a Disney Park Near You

A Galaxy Far, Far Away Just Got Closer

Amanda Woomer-Limpert is as well versed in Disney lore as Josiah LeRoy is in Star Wars lore. Keep it locked right here for all the latest in Disney, Star Wars, and more.

One thought on “First Look at “Mary Poppins Returns””