On February 2nd, Nintendo released yet another mobile game entitled Fire Emblem Heroes. I personally am not a fan of mobile games and would rather play on my 3DS in general, so in playing this game I was skeptical right from the gate. However, I was wrong. This game is actually quite fun and if you’re a newcomer to the series, this game will be perfect for you.

WILL YOU RESCUE ALL THE HEROES?

Just like in the newer installments of the Fire Emblem series (Awakening and Fates), you the player are called upon from another world to aid our heroes from the Kingdom of Askr. You have the power to summon heroes from other Fire Emblem games to fight for you and quell the evil ambitions of Veronica and the Emblian Empire. Unlike in the newer games however, you do not create an avatar, you just create a nickname and that’s it. So sadly, no Waifus and no future children.

It’s a free to play mobile game, so just like with your standard free to plays, you have stamina that you can spend to complete story maps, special maps, and training. After you’ve spent it all, you have to wait for your stamina to restore or you can simply pay to have it restored automatically. There are also things called Orbs. Orbs are very important, as you cash orbs in to get more heroes. The orb summoning system is your classic Gacha game. The more orbs you spend the more you’re likely to get a rarer character. The characters also have a growth system. Five stars are the best but again, the chances of getting  a five star character are better when you spend more orbs. Orbs you obtain for completing story missions can also be bought using real world currency. 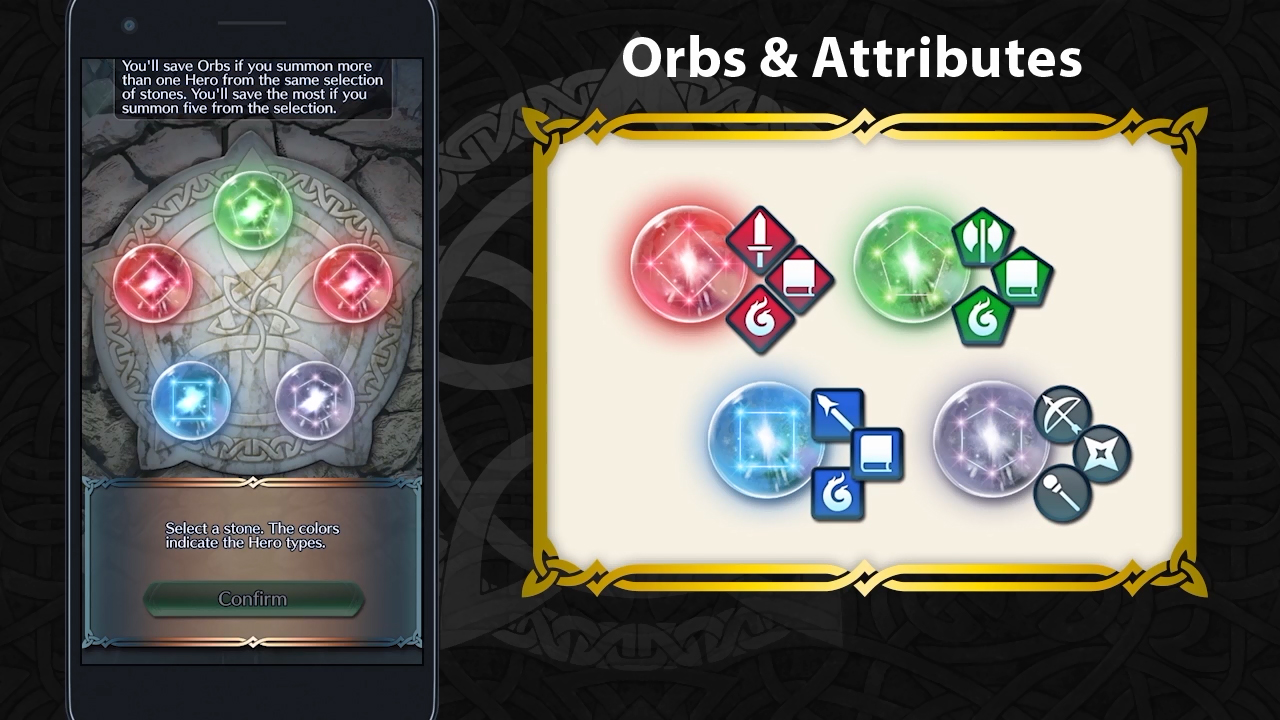 Summoning is another beast in its own. When using the summoning system, five random colored stones are generated. The color stones are Red, Blue, Green, and Purple.. Reds are generally Swords and mages, Blues are lances and mages, Green are axes and mages, and Purple can be ninjas, archers, and healers. The more you summon, the more it increases the chance of getting a 5 star character, and the less amount of orbs it’ll take. The higher number of stars, the better attributes and skills your character will have and the faster they will learn them. I have summoned about four times using orbs I’ve  obtained from completing maps, random giveaways, and app log-on bonuses. The first time I got nothing, the second time I was rewarded with a 5 star Camilla and a 5 star Linde. The third time I was blessed with a 5 star Corrin and the fourth time was just random 3 star characters. I know a lot of people have been deleting the game and reinstalling the game to get better characters right from the beginning but it’s unnecessary with the amount of orbs they are giving away for free.

I won’t lie – they explain very little when you start playing the game. Maybe I just wasn’t paying attention, but they kind of throw you to the wolves and it wasn’t until after a little trial and error that I was able to make sense of it. On your screen, you’ll have a set of buttons that are labelled: Home, Battle, Allies, Summon, Shop, and Misc.

Home will take you to your castle which will show you a couple of your heroes, messages from Nintendo, Quests, Presents, and Friend Requests.

Battle takes you to different areas that you’ll probably be spending the majority of the game in. There’s Story Maps, Special Maps, Arena Duels, and Training Tower. There’s also another area that I have yet to unlock.

Allies will take you to the heroes that you’ve either summoned or obtained from doing special events.  You can edit your team, learn skills, equip skills, level up, or use an advanced growth. I highly suggest you use the orbs you gain from starting off and get new allies. After doing so edit your team, make sure that you have all your bases covered and that your 5 Star or lowers make the cut for your four person team.

Summon is where you use the orbs you’ve obtained from completing Story Maps or just logging in.

Shop is where you can use real world money in buy in-game currency to purchase orbs, upgrade your castle, restore your stamina, restore dueling swords, or expand your barracks.

Misc. is where you can change your settings, look at your inventory, manage your account, watch movies, game center, FAQ/ETC.

Story Maps takes you to where the meat and potatoes of the story are. Story Map contains 9 chapters in total and has about 5 parts in each. You can play them in normal, hard, or lunatic mode. Story Map is like your classic Fire Emblem but the maps are significantly smaller. Just like your regular tactical RPG you are only allowed to move a certain number of spaces for each character and then after your party is done moving, it’s the enemy’s turn. They also got rid of perma-death for this game, which I’m kinda glad because if I lost one of my hard earned 5 star characters I would be pissed.

Training Tower is an area that you can use to raise the levels of your characters. They have them in different level ranges to give you the challenge that is right you. Stamina also costs a lot less than the story maps.

Special Maps are Special events that Nintendo offers which include daily challenges, week challenges, and month challenges. You get some ‘rarer’ characters here.

Arena Duels is a place that you can battle other people from around the world. Playing this was a lot of fun and there are rankings and different tiers.

I found Fire Emblem Heroes to be quite enjoyable and I found it to be very addicting as well. The art style of characters and their chibi likeness while fighting are a nice touch, as well as having them voiced over by their actors. I’ve been playing for five days and I’ve finished all the chapters they’ve released. However, I’m pretty sure they’ll be doing regular updates because the story isn’t complete. There’s only a couple downsides about the game, the constant need for a internet connection, and the running out of stamina, but overall it’s a thoroughly enjoyable game.

+ A Fire Emblem for First-timers

-Stamina is a buzz killington

Sam Budzinski is The Geekiverse’s Queen of all things Nintendo. Check out her weekly column with Josiah LeRoy every Wednesday.