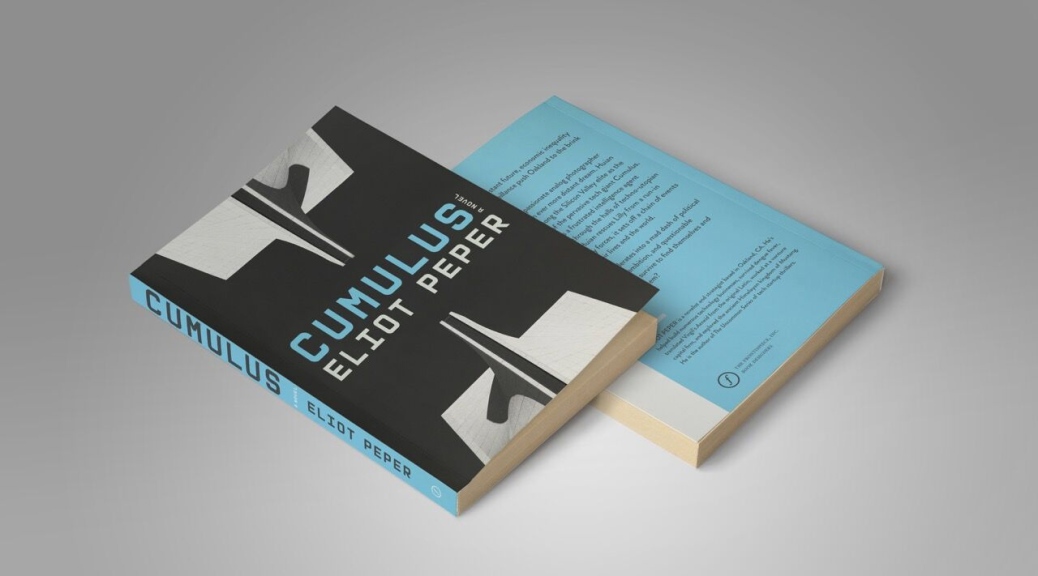 I’m a child of the 1970’s and, growing up, I most definitely remember my dad wandering around saying “1984 is coming.” The funny thing, living in 2017, I cannot think of what government surveillance thing would have happened in the 70’s to invoke that response from my dad. Eliot Peper’s novel Cumulus, drops us into the other side of that full surveillance society that my dad was concerned about – the corporate surveillance state.

Set in the near future, Cumulus, envisions a dystopian Oakland that isn’t controlled by an overreaching government, but instead by an enormous multi-national tech company named, you guessed it, Cumulus. I love the name, as it refers to clouds, which, of course are indicative of the current trends in high-tech, but also to the clouds in the sky, which we often appreciate (like the current state of our technology) but certainly have a propensity to turn dangerous (like the current state of our technology). Certainly one of Peper’s most pronounced themes.

Everyone knows how I feel about the growing power of the corporate world.  It is happening, and to me, it is as dangerous, if not more, than any threat of an overreaching government, as we readily allow big companies access to all of our lives. Peper’s Cumulus is a company that starts as a tech company and expands into autonomous vehicle ride sharing with their company Fleet, into privatized education with the company Learner, and with Lancer,the rating service that freelance workers rely on to get to their work out there.

At the heart of all of these companies is Cumulus, that ties all of these services together with an insidious tracking and surveillance network that collects data on every user.

Also central to the themes in Cumulus is the growing disparity between the wealthy, who live in the gated “Green Zones” with private security, and the rest of the people who live in “The Slums” where the police barely respond, even to murder calls, and staffing is so short that many crimes go hardly investigated and rarely solved. Illustrating further the disparity between rich and poor, all of Cumulus’s services are subscription services, available only to those who can pay.

Cumulus closely follows three main characters that are interwoven into a murder mystery that threatens to unravel all of their different worlds. Huian Li is the founder and CEO of Cumulus, and she navigates the maze of corporate expansion, at all cost, using the darker side of her technology to spy on her rivals and targets. Graham Chandler is a former intelligence agent, whose quest for power leads him down a dark path as he builds a house of cards in his climb up the corporate ladder. Lilly Miyamato is the young idealist who happens to be in the wrong place at the wrong time and gets embroiled in the web of dangerous people who won’t be stopped by a freelance “analog photographer” who makes her living on the novelty of taking old school film photos.

In a particularly foresightful decision, Peper includes another poignant element to his narrative – the rise of gangs as an element of survival in this society of extremes. In the world he has crafted, the former NBA star Frederick O’livier has created a full-service, complex organization in the heart of West Oakland, that caters to the needs of all the dwellers of the Slums. Everything from drugs to mixed martial arts fights to a full blown security service that not only protects the organization, but also the people in the neighborhoods. Like any good politician or businessman, Frederick has worked to establish a network that includes mutually beneficial relationships with the police and the mayor that allows him access to their resources.

As a read, Cumulus is a quick one. It has the short chapters that I really enjoy, and it is not at all bogged down with thick tech jargon that makes the book inaccessible to many.

From a plot standpoint, it has many elements that make the book an enjoyable journey. I’ll admit that I found the ending a bit contrived, and while unexpected, it was sadly, a bit unbelievable, and therefore a little unsatisfying. Luckily, there was enough other good things to make this something that I was able to overlook.

I would have also liked this book to be another 50-100 pages longer because I would have enjoyed more character development. I liked all of them enough to want to know more, to get to see their complexities – the layers that we all have that make us intriguing. This book could have been helped with adding some more flavor to the characters.

Peper is a young author. He has five books available and I have already ordered his newest, Neon Fever Dream . I am certain that if he perseveres, he’ll learn to fix the minor problems in Cumulus and we’ll start to see more complex, believable, and enticing characters to lead us through his well-conceived environments.

+ Research – Cumulus is well-researched, but not bogged down in technical jargon.
+ Well-conceived – the dystopian world Peper paints is as believable as it is frightening.
+ Quick read – Beach read, winter vacation read, even just a snowy or rainy weekend read.

– Characters need some more development.
– Ending was a bit contrived, and not as satisfying as I hoped for.

Liked This: Check Out These

Book Review: All the Birds in The Sky by Charlie Jane Anders

Did you read Cumulus? What’d you think? Leave me a comment below.