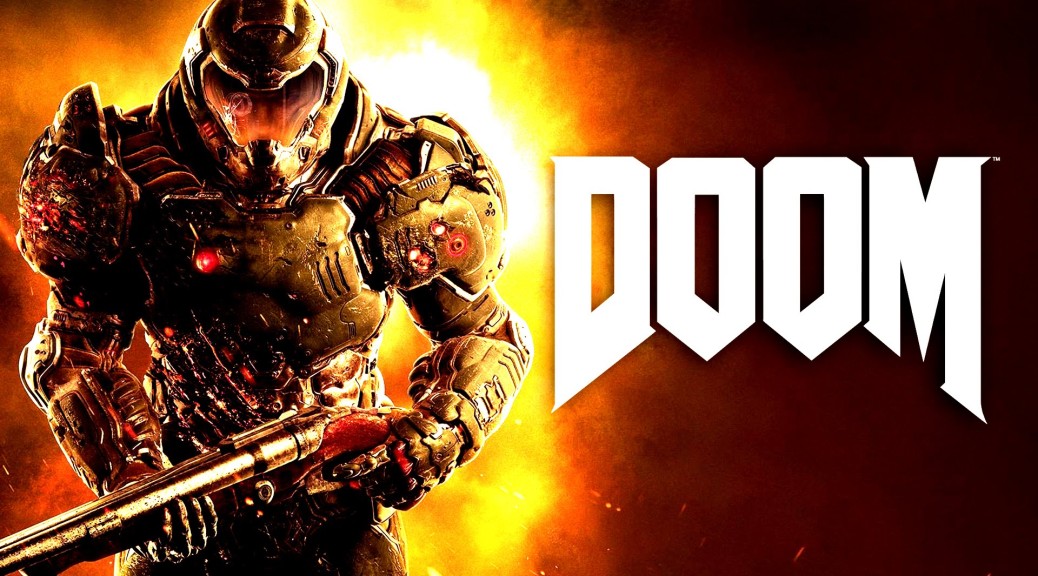 PREPARE TO MEET YOUR DOOM

I knew I would enjoy playing Doom in some way, shape, or form, but I didn’t know that I’d love it. I also didn’t know that it would go down as one of my favorite First Person Shooter experiences to date.

The game’s development went through what is known in the industry as “development hell” (no pun intended, sometimes it just works out that way – get off my back). Announced in 2008 as “Doom 4,” the game was slated to release on Xbox 360 and Playstation 3. It was supposed to take place on earth, much like Doom II: Hell on Earth. After years of alleged mismanagement and turnover, the game was restructured to become “Doom.” Announced at E3 2014, many critics and fans alike were skeptical of the impending doom that was to hit this game’s quality (that one was on purpose).

I am so very happy to report that id Software knocked it out of the park with Doom, being able to not just join the conversation alongside industry juggernauts Call of Duty, Halo, and Battlefield, but lead it.

I would tell you that this is spoiler free, but there really isn’t anything to spoil. The setup: you are a nameless soldier who wakes up in a Union Aerospace Corporation research lab on Mars. The voice you hear throughout the game is that of Dr. Samuel Hayden, who has transferred his mind and likeness to an android. The reason for delving into Hell’s realm? An energy crisis on Earth. The UAC has attempted to harness energy from Hell and channel it our way. In doing this, a portal is open in which travel is now possible between the two realms. Hayden prompts you to halt the demonic invasion and to close the portal.

You can figure out the rest.

Doom features 13 levels of crazed, lightning quick action with brief moments to take a breath existing only sparingly. The wide array of enemy types, level design, and choice of weapons make this a sharp shooting game, albeit a simplistic one. You’ll come across your fair share of extras to pick up that serve to tell the existing story in more detail (thanks to no cutscenes and very few pre-rendered segments), along with the background of the UAC, the main characters, and the history leading up to the game. I was admittedly disappointed upon first learning that we would get no cutscenes, but quickly realized I wouldn’t need them. If you know me at all, that’s high praise.

Action is intense from the get-go and nearly never lets up. As the game goes on, the level of insanity only ramps up. If I could describe Doom in one word, it would be “chaos.” Enemies fly at you from all angles, in all shapes and sizes, with different amounts of hit points and different abilities and attacks.

The varying enemy types, along with inventory of weapons readily available, make Doom somewhat of a chess match – albeit at a rapid, blistering pace. My biggest challenges came with some of the enemy types that could fly or run me over, though they couldn’t take as much damage as some of the bigger brutes could. Often times in a given room or area, you’ll face numerous types of enemies, and, as I mentioned, there are certain methods that will serve you better in taking down a baddie.

The amount of weapons ins’t vast, but it doesn’t have to be. You’ll see your basic shotgun, pistol, rifle, and rocket launcher, in addition to a few other guns that are somewhat unique to Doom. The upgrade system is fantastic, with the ideal amount of options that gives you a fair amount of choice without overwhelming you. In each level, you can obtain up to five stars; this serves as your level rating. With each enemy you kill, you begin to fill a star’s meter. For every star you fill, you gain a weapon upgrade point to spend. In this way, the game gives you incentive to completely clear a room as opposed to trying to just eek by and move to the next section. Sometimes, it is mandatory to obliterate everyone in sight, sometimes not.

In upgrading my weapons, I adored the mod options I had. I had my favorite weapons certainly pegged midway through the game, but soon realized that I would need to use my complete arsenal to defeat every enemy. Each weapon featured upgrades that would modify its current ammunition or enhance its powers. For example, when my rocket launcher was fully upgraded, I not only could shoot 3 rockets at a time, but I was able to add a tracking device so that I could jump around on the fly and still hit my target. In later stages of the game, I would get in such a groove when destroying my targets that it felt like I was conducting an orchestra; a symphony of destruction. It beautiful, gory, and addicting.

Bosses feature prominently towards the end of the game but are sparingly used in the first half of the game. Each fight took me numerous attempts, resulting in sore trigger fingers and, shamefully, lots of cussing (I should probably apologize to my wife and puppy). The game forces you to find a specific strategy that works. There’s little to no margin for error. Now these games are not Dark Souls Series’ caliber when it comes to difficulty, but Doom is certainly one of the more difficult shooters out there. There is no hand holding and no sympathy. However, the satisfaction and feeling of accomplishment upon finally beating a stage that features crazy amounts of enemies or finally downing that boss is substantial. The game didn’t hook me in until around the 4th or 5th level, but once it sunk its claws in, it never let go. I found myself thinking about the possibilities of the next level when I was away from the game. I craved the satisfaction of accomplishing the next big feat, something I’ve rarely felt in gaming.

THE SOUND OF VICTORY

The game is visually par for the course when it comes to modern day shooters, but isn’t anything special. What is special, however, is the in-your-face, punishing soundtrack composed by Mick Gordon. It’s heavy metal all the way and it is glorious. The pacing of the music is a prelude to what you can expect in an imminent fight. The 7/8/9 string guitars used in the tracks adds a meaningful depth to the feel of the game while the double peddle bass drum is simply put, machine-like. It is one of my favorite soundtracks in any game ever and had The Geekiverse awarded a Geekaward to the best score in a game in 2016, I feel confident that this would have won.

Pick up the award winning soundtrack to Doom here

I admittedly spent little-to-no time in the multiplayer/Snap Map portion of the game. id Software could have completely left it out and it wouldn’t have affected my overall scoring at all. That is a testament to the quality of the single player campaign, which is truly the only reason you should purchase the game. Nearly 8 months after its release, you can find a copy at a bargain.

Doom’s single player campaign is one for the ages and will be remembered as one of the greatest of its generation. Very few times have I felt the way I did upon completing challenge after challenge in Doom. If you have any fondness for First Person or Third Person Shooters, you are doing yourself a disservice by skipping this title.

+ Intense, fast pace ensures you stay on your toes.

+ Multiple weapon and enemy types force the player to change strategies on the fly.

+ Challenging, even on lower difficulties.

-Occasional dip in quality of control; loose at times, particularly when jumping or double jumping.

Josiah LeRoy is one of The Geekiverse’s many Shooter fans. You can catch him blowing crap up on Xbox Live & Playstation Network (and soon, the subscription-based service for Nintendo Switch!!!) via JosiahIsLegend.

Doom was reviewed on the Xbox One. It is also available for Playstation 4 and PC. All in-game pictures taken using the screenshot ability on Xbox One.

What is a hindsight review? It’s an article in which a Geekiverse writer reviews a game that they have never played before and is outside its launch window. It offers a fresh perspective and shows which games in your backlog are worth playing through.