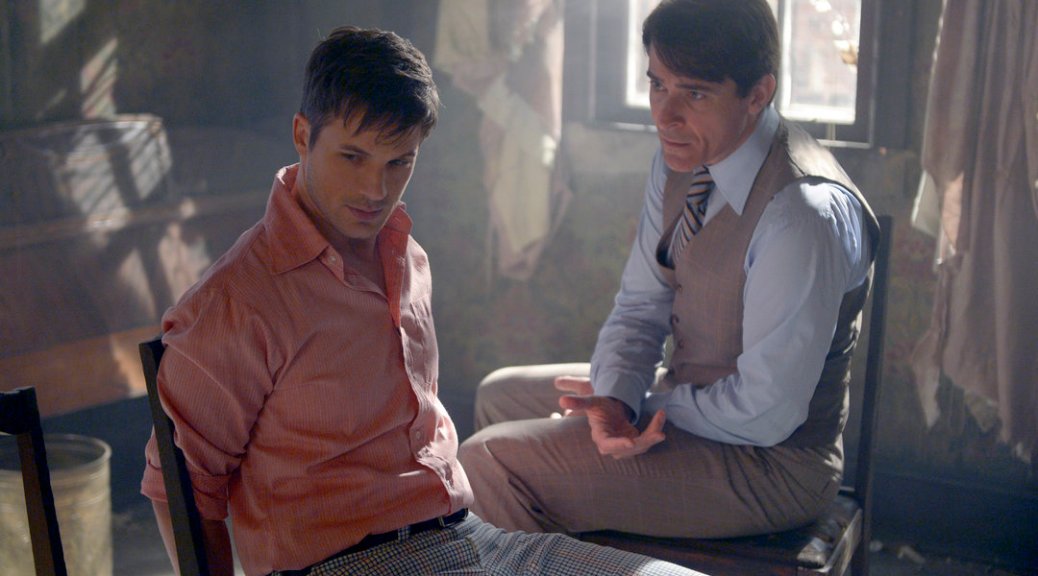 The stakes are getting higher and the suspense is making viewers tense.

This episode opened with a view into Rufus’s family life, as we found out that he lives with his mom and little brother. We learned that he works very hard to support his family, and that Ritten House continues to threaten their safety and his. Poor Rufus is being blackmailed into breaking the trust of his newfound team. What a predicament!

In this episode’s adventure, the group is sent back to 1972 and the Watergate scandal. Flynn took things a step further and kidnapped Wyatt, leaving Lucy and Rufus to find the elusive “doc” and bring it back to Flynn on their own on threat of killing Wyatt. It was good to see Rufus take the lead on this mission, proving himself and showing that Lucy and Wyatt need him as much as he needs them.

It was also good to see the team outsmart both Ritten House and Flynn by leading them to the same place to battle it out, while also leading Doc (who actually turned out to be a woman, not a document) to safety. Week after week this trio improves their team building skills, and this will hopefully continue during future missions.

As the episodes go on, Ritten House is becoming more and more desperate to keep concealing their identity and purpose, but the team is getting closer to uncovering the truth. After this episode, it seems that these three are stuck in between Garcia Flynn and their secret government employers, unsure of anyone’s intensions and which side is in fact striving to do the right thing. Is Flynn actually trying to do good, while the team is actually unknowingly on the wrong side (originally theorized in my review of the Atomic City episode)?

Rufus finally told the team about the recordings he’s been forced to give to Ritten House, and in the end, although he broke their trust, they came up with a plan to keep a low profile for the time being and let Rufus continue recording everything and reporting it back to Ritten House. This way, they do not face any immediate danger as a result of Rufus spilling the beans, but they are also aware of this fact and can watch what they say around Rufus’s voice recorder. I think this was a smart move and that it maybe should have occurred sooner, but I understand Rufus feeling that he couldn’t say anything for fear of Ritten House finding out and fulfilling their threats to his family’s safety.

At the end of the episode, we see Lucy muster up the courage to knock on her father, Benjamin Cahill’s door, which she was unable to do at the beginning of the episode. When they spoke, it appeared as though he did not know who she was. After she mumbled some excuse and left, though, we saw Cahill make a mysterious phone call and say, “guess who just showed up at my house.” WHAT?! Who was he talking to? Could it have been Lucy’s mother, or possibly have something  to do with the elusive Ritten House? It appears as though we’ve got a new cliffhanger on our hands.

As this premier season of Timeless goes on, the action and suspense have been getting stronger. The team is becoming more close knit and working together better, even through all the obstacles thrown in their path. Each week we seem to get more answers with the stipulation of new mysteries and cliff hangers.

+ “Maybe when you’re fighting Flynn, you can blind him with that suit.” “I look like Greg Brady!”

+ When Rufus said “Like a double agent? I can barely single agent!”

– It took Rufus a heck of a long time to tell Lucy and Wyatt about Ritten House’s recordings. They may have been able to do something about this sooner had they known.

– They’re opening up so many mysteries, even though the season will soon be coming to a close – will we get answers, or will we be left with a bunch of cliffhangers?

What did you think of this week’s episode of Timeless?  Leave your comment below!

Jamie LeRoy is the head Graphic Designer and Photographer at The Geekiverse. The first couple of book series she fell in love with were Harry Potter and A Series of Unfortunate Events, both of which are still at the top of her list today.

Take a look at our review of the last episode here:
Timeless: The Alamo Review
Check out Jamie’s video series in which she unboxes geek jewelry from the Fandom of the Month Club in Jamie’s Got Mail!

Want to see some of our other reviews and articles? Check them out below!

BREAKING DOWN THE INTERNATIONAL ROGUE ONE TRAILER

One thought on “Timeless: The Watergate Tape Review”