Animation Throwdown: The Quest for Cards, is a mobile card game for lovers of all things cartoon. The game starts with the player pulling the wrong lever in the lab of Professor Farnsworth creating a time paradox. The paradox brings the characters from Family Guy, Bob’s Burgers, King of the Hill, American Dad and Futurama all in the same universe. In their agitated state from cross dimensional travel, the first thing they want to do is battle, with their best deck. Soon after creating the paradox, the player is asked to choose a hero, one of the main characters from each universe. Depending on the choice of hero, the player is given a base deck with cards from the hero’s universe to play with. 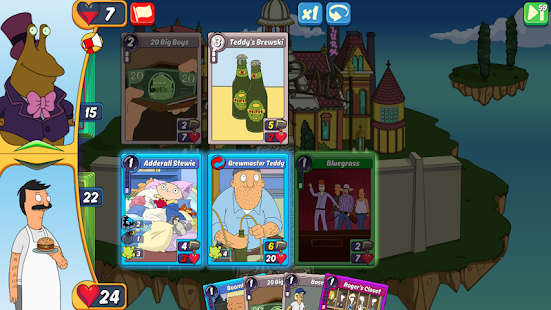 The game itself plays much like a simplistic form of Blizzard’s ever increasingly popular Hearthstone. The user plays cards that has attack and defense stats, and can come with any of a large array of abilities. There is a set amount of room on the board, 5 cards, and allows player to combine cards from their hand with cards on the board to create a stronger card. The majority of each battle comes down to deciding to put another card on the board and creating a combo with a card already on the board. Combining cards in game, creates a new card with different name and art. Many of these combos need to be researched, and often take hours before the research is complete. Research time can be skipped by using gems, a purchasable resource in the game. Each game itself normally takes less than 10 minutes, right on par for many of the popular mobile card games. The game has a fairly long single player campaign, with around 90 different battles, which can be replayed to get better rewards after each win. The player has a set amount of battles they can do before having to reset a bar with cash or wait a long amount of time to regain the ability to battle. To be able to gain more heroes, the user is tasked with going to the arena to play against other players. Again there is a set amount of battles before having to wait or reset the bar with gems. Rewards for multiplayer are better in comparison than the single player alternatives, but require a better deck.

There is a pretty deep amount of card variety in the game. With a fairly large amount of base cards in the game, the combo mechanic brings an even greater amount of cards to a relatively new game. When first starting, newer players are compelled to think that cards from different universes don’t combine, but after research a good amount of cards from all universes can be combined. This again takes a lot of time and or money. Cards can be gained from buying “packs”, which is used lightly here, with coins which can be gained from games or shelling out cash for more prominent packs. Although buying packs with gems can net you a fair amount of cards, getting a card pack with coins only nets you a single card. Yes you heard that right, a single card. On top of this, cards need to be upgraded using another in game resource of power. Cards can be leveled up to a certain point, normally between 3 or 4, and the combined with another identical card to make it more powerful. Again this can be gained by recycling in game cards or shelling out cash.

When playing the game itself, I had a lot of fun with it. The battles are fast and entertaining. Using the different universes to create cards creates a fun experience for fans of any of the shows. The downfall of Throwdown comes with the micro-transactions. Although I wouldn’t consider the game a pay to win, it sure is a pay to save a lot of time. If you have the patience to wait and the self-control to not spend too much money on the game, Throwdown is a super entertaining and a must for card game lovers or lovers of the show.

Kevin Kapsiak is a writer for The Geekiverse. Catch him on Twitter.