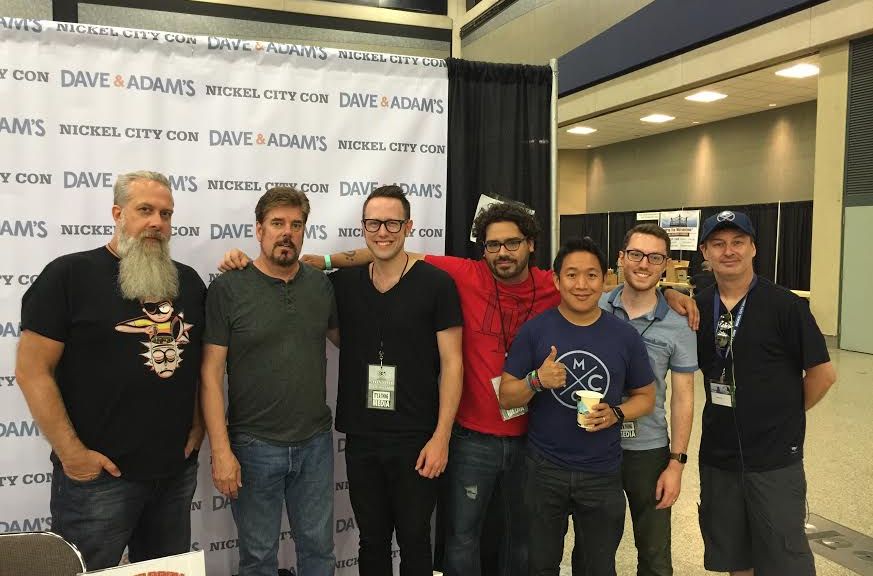 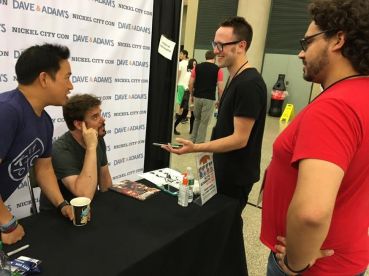 Josiah LeRoy: First of all, how has Nickel City Con been treating you guys?

Michael Zapcic: Oh you guys are great, we love Buffalo. Buffalo’s a lot of fun.

Ming Chen: Have they been treating you well? All your demands have been met?

Michael Zapcic: Yeah Ming, because I’m a deman- you’re the one with the demands, buddy, so.

Ming Chen: I do, I demand only the finest Duff’s chicken wings, Genesee Beer…

Michael Zapcic: It’s true. He said he will not go to the Anchor Bar.

Michael Zapcic: I had some Tim Hortons’ coffee and some Timbits this morning.

Josiah LeRoy: Geek Culture – we’ve been talking about it a lot at our company, The Geekiverse – it’s become mainstream, if you will.

Ming Chen: That should be on a shirt.

Michael Zapcic: It should. And I came up with that!

Josiah LeRoy: We could make that happen for you.

Ming Chen: My feeling is that everyone knows it’s cool now. We knew it was cool the whole time, what are you talking about?

Michael Zapcic: Yeah, you people are catching up to us.

Ming Chen: You guys are the ones who were asleep, man.

Nick Ramirez: We were ahead of the curve.

Ming Chen: You guys were the ones that woke up, we were awake the whole time.

Ming Chen: Star Wars for sure.

Josiah LeRoy: My man! Me too.

Michael Zapcic: The Batman TV show and the Spider-man cartoon from 1966.

Nick Ramirez: I’m a big Marvel guy, he’s (Josiah) a big Star Wars guy, both fan bases are exploding right now. You guys were a big part of that with Comic Book Men.

Nick Ramirez: I talk to a lot of people at work who didn’t have a familiarity with the culture who thought it was just guys in their mom’s basements, then they see you guys, close friends who are really just doing something they love. Do you guys get that feeling when you talk to people at cons and such?

Michael Zapcic: Yeah! The most normal people in the world. You find out that your lawyer is a closet Star Wars guy or the lady who cuts your hair down at Supercuts is a huge Wonder Woman fan. It’s actually pretty cool.

Ming Chen: It’s fun meeting like-minded people. When we were younger, there were none. I had 2 friends who read comics in a class of 400 people.

Ming Chen: It was tough to find like-minded people. Now, they’re right in front of me, so it’s great.

Josiah LeRoy: It’s amazing. We kind of talked about it as well, it seems like a place (cons) where everyone has diverse tastes, but everyone has a common goal of sharing something that they love. If you guys could give one bit of advice to someone who maybe wants to do what you do – whether that’s getting into movies, comic books, media production, what would you say?

Ming Chen: I think that’s a good point. Being a Geek, it doesn’t have to be pop culture or sci-fi really, it could be whatever you want. That makes you a Geek. If you love it, you could be a Geek for gardening or a Geek for sausage making.

Michael Zapcic: Yeah seriously! There are people who love making a Landager out there, so I say go for it man. Or a woman. Don’t want to be exclusive.

Josiah LeRoy: There you go, doesn’t matter. We talked to another vendor who said they were very passionate and it doesn’t matter what it is – maybe you’re a football Geek, a Marvel Geek, it is what it is. 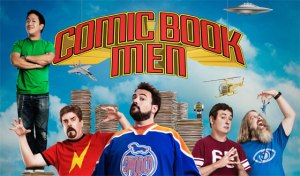 Season 6 of AMC’s Comic Book Men is currently in production. You can pick up the first 5 seasons on Amazon Video today or visit the brick & mortar store at Jay & Silent Bob’s Secret Stash in New Jersey.