Hey there Geeks!  It’s been just about a week since my last update, so let’s dive right in and check out the progress I’ve made on my cosplay of Reaper from Overwatch!

Just as a refresher, here is what Reaper looks like: 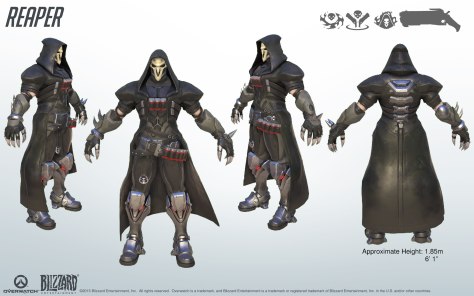 My last update was mostly about the Hellfire Shotguns that Reaper uses, and those are still being worked on; however, I’ve made some pretty good progress with the armor!

The first thing I needed to do was decided how to make the armor.  I wanted to use something as a base, since I didn’t know how else to build it up and make it look like it actually has decent mass.  What better way to make cosplay armor than to use an actual protector?  I found a paintball chest protector on eBay and it was super cheap, so that was the one!

The only issue I see maybe happening is affixing the armor plates (more on that later) since the protective padding is covered by a mesh.  You can kind of see this in the picture.  I’m not sure what kind of glue to use to make sure it sticks.  I may have to go crazy with a hot glue gun or some Gorilla Glue.  The good news is that I have enough time to try it out and make changes. One of the things I’m preparing for is tossing a shirt over the armor and gluing the plates to the shirt.  We’ll see what happens!

Speaking of the armor plates, I did a bunch of research online, and I found most people recommending a thermoplastic called Sintra for this kind of project.  For the most part, thermoplastics are boards that are sold at various thickness, and they are very rigid.  Heat them up, and they become malleable, and then you can shape them into what you need.  Once they cool down, they remain in that shape.  Pretty awesome, huh!

I then used some posterboard and a very steady hand to draw each individual armor plate.  People recommend using posterboard for this step because it folds and is semi-rigid, so it more closely reflects how the Sintra will behave.

In the picture above, you’ll see the posterboard cutouts on the body armor base.  The cylinders are just a placeholder for the rounds that Reaper wears on his chest.

The next step was to trace the posterboard designs onto the Sintra and then cut them out using a retractable knife.  This was definitely the most stressful part of the process so far.  My Sintra order cost over $60, so I didn’t want to screw something up!  I made it through with only a couple hiccups though!  Hooray for me!  Here’s what the actual plates look like on the armor:

Not a huge difference than from the posterboard rendition, but if you look closely, you can see the added thickness.  Now I have to get some carbon fiber duct tape or a vinyl decal to place over/around them to make them look more like Reaper’s actual armor.

Oh yeah, and I got this in the mail last week:

I love how the mask turned out!  I ordered this from a user named newcoser2013 on eBay, since there was absolutely no way I could have made this myself.  He/She did an amazing job!  I can’t wait to get the rest of this costume together!

Over the next week or so, I plan on finishing the body armor and the guns.  I also want to get started on the gauntlet/glove combination and the trench coat/robe he wears.

Thank you for checking in on my progress!  I’m hoping to have this cosplay all done by the time Nickel City Comic Con rolls around, so you’ll be able to stop by the Geekiverse booth and check out the costume in person.  Until next time, geek responsibly!

Andrew is a writer/editor at The Geekiverse who is in way over his head with all this cosplay stuff, but we’re sure that he’ll look back upon these moments fondly when he is a multi-million dollar YouTube cosplay star.  Yeah, and maybe monkeys will fly out of his butt.