Hello geeks!! What a doosey of an episode! It was everything we’ve been waiting for and everything they’ve been building upon. In this episode we see Stark vs. Bolton and Daenerys Vs. Masters. Be warned: This article contains spoilers!

We return to Meereen where Queen Daenerys is watching as her city is crumbling beneath her as the Master’s warships lay siege.

I love watching as Tyrion tries to quell her rage by telling her that the city was on the rise, and I love how Tyrion is the voice of reason even amidst chaos. They meet with the three Masters from the previous episode outside the Great Pyramid and talk about their terms of surrender. The Masters surrender.  The Masters of course laugh at them, but a low flying dragon wipes the smirks off of their faces. Daenerys takes off upon the back of Drogon, and with her three dragons, she wipes out most of the Masters’ fleet. In the chaos, the Sons of the Harpy have taken to the street again, slaughtering innocents, but it doesn’t last for long as Daario and Dany’s Khalasar ride into Meereen and end them quickly. The visual effects of the dragons were impeccable and you can almost feel the heat coming off of the burning warships. 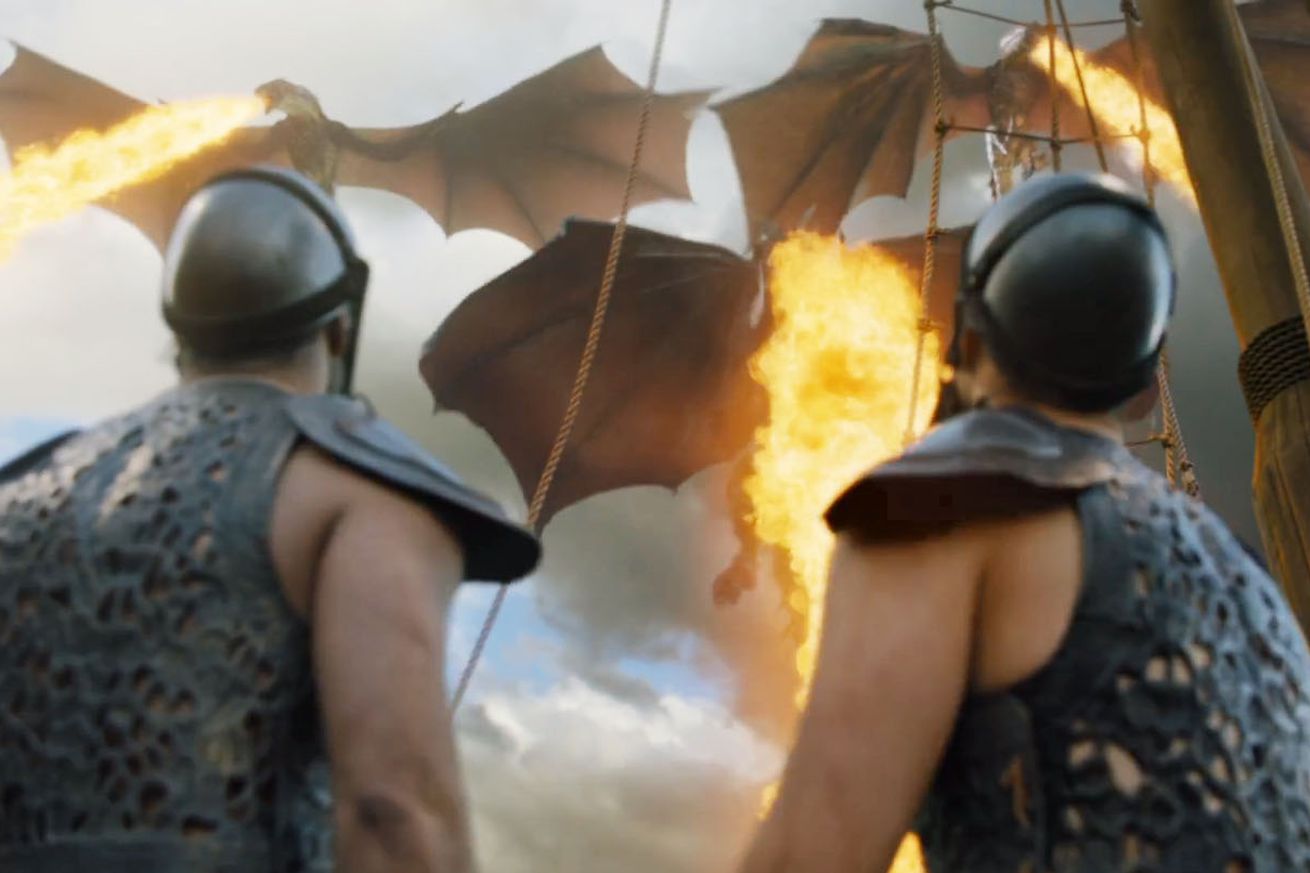 Back at the Great Pyramid Tyrion tells the Masters that they made a pact and that they violated that pact. In doing so, one of them must die for their treason. Quickly the Masters turn on one another and pick the lowest ‘Master’ to die: the Master that once bought Tyrion and Jorah from season 5. Executioner Greyworm goes to the men and kills the two unsuspecting Masters. Talking to the low born third Master, Tyrion leaves him with a message and a warning: “Tell your people what happened here… Remind them what happened when Daenerys Stormborn and her dragons came to Meereen.”

Sometime after the dust has settled in Meereen, Daenerys and Tyrion are met inside the Great Pyramid by two familiar faces: Theon and Yara Greyjoy. They tell her that they want to take back the Iron Islands, and in exchange, they will give her their 100 warships and help her take back Westeros. All Daenerys will have to do is kill their uncle Euron and all the Iron born will have to stop being Vikings. Seems pretty easy right? I’m hoping Yara doesn’t end up stabbing Daenerys in the back, but I did love that Yara was hitting on Daenerys.

Jon, Sansa, Tormund, Lyanna Mormont, Davos and others meet with Ramsay outside Winterfell to try and come to terms with Ramsay without going to war. Ramsay, cocky as ever, thanks Jon for bringing back his beloved wife, and tells them to kneel before him and swear to him their fealty. Ramsay knows that they don’t have the horses or numbers to win. Jon knows this and tells Ramsay that instead they’ll fight one and one and spare the lives of their men. Ramsay laughs at him–he knows he wouldn’t be able to beat Jon one on one, so he refuses his terms and threatens the life of their brother Rickon, whom we know Ramsay has. Sansa, no longer able to stomach being close to Ramsay’s smirking face, gives him a message: “You’re going to die tomorrow Lord Bolton, sleep well.” Ramsay comes back with his own threat. “My dogs are desperate to meet you. I haven’t fed them in seven days. They’re ravenous.”  My favorite part of this scene was seeing Lyanna Mormont again. If looks could kill she could have killed them all.

Jon and the others regroup at camp and go over their battle strategy and numbers. It looks futile, but they know they have to fight. Sansa and Jon have a disagreement over their odds, and it almost seems like Sansa is about to tell Jon that she has asked for help from the Vale, but she falters and she warns Jon that she will not go back to Ramsay alive. I don’t understand why she’s keeping the Vale army a secret but we’ll probably find out in the next episode. Jon goes to Melisandre seeking wisdom for the upcoming battle, and he tells her that if he should fall in the battle, do not revive him. Davos goes on a walk to clear his head finds the wooden stag that he made for Shireen burned under a pile of wood. The look on his face as he looks back on the camp says that he has some idea of what happened to the princess.

On the day of the big battle, its overwhelming seeing the odds that are stacked against Jon and the others and it’s even worse when Ramsay brings out his trump card: Rickon. He tells Rickon that they are going to play a little game and pushes him out into the bare land that separates the armies. He tells him that he has to run to his brother and Ramsay picks up his bow and arrow. Rickon takes off sprinting and Ramsay knocks a couple arrows back toying with him. ZIGZAG RICKON!!  Jon climbs upon his horse and takes off to get to Rickon but an arrow pierces Rickon’s chest and kills him just before Jon can get to him. Enraged, Jon  throws caution to the wind and chargers at the Bolton army. This is where all hell breaks loose. Jon’s army takes after him but his horse is taken down as he’s overcome by arrows, looking up he’s shocked to see the Bolton army charging towards him.

With a last ditch effort Jon takes up Longclaw and makes a stand. Horses charge horses, men hit men and chaos erupts all around Jon. Watching him dodge and dance around men, horse, and arrow alike makes me wonder if he’s impervious. Jon cuts down man after men, slowly being consumed by the violence. Ramsay orders his men to continually rain arrows down among allies and enemies. After a while of this the bodies of the dead start piling up forming a barrier between Jon’s army and Ramsay’s, Ramsay uses this to his advantage and surrounds the allies by using an old spartan shield and lance technique, piercing any person who gets too close. Jon knows the only way to win is to get over the wall of the dead and get to Ramsay on the other side, and he’s not the only one. The army and Wildlings know this too and make for the wall. In the fray Jon is tackled to the ground and is nearly trampled to death by people, but with a last ditch effort, he pulls himself up to freedom. When all hope looks lost, a horn blast sounds out from across the battlefield, and the knights of the Vale make their grand entrance with Baelish and Sansa in tow.

The knights of the Vale clear through the Bolton army like piss through snow. Jon, Tormund, and their Giant friend make after Ramsay who takes shelter behind the walls of Winterfell, but our Giant friend makes easy work out of the door and breaks through it making entry easy for everyone except him. He falls to his knees looking like a pin cushion, stuck with numerous arrows. Jon goes to him but the Giant takes an arrow to the eye from none other than Ramsay Bolton. Jon, enraged yet again, goes after Ramsay and beats the snot out of him.

HOLY !! This episode was what I needed, I am so pumped and so happy that Ramsay is finally put to and end and Jon and Sansa have their home back. I’m so happy that Daenerys finally put Meereen back in it’s place and made a pact with Yara and Theon. I cannot wait for the last episode, I need to know what is going to happen in King’s Landing and I hope that it is as good as this episode. One more episode left friends, say it isn’t so. Next episode is: Winds of Winter.

Sam Sarvis is a proud writer for the Geekiverse.

One thought on “Game of Thrones: The Battle of The Bastards Review”