Bravely Second is the much needed sequel to Nintendo’s Bravely Default which came out in 2012. Just like it’s predecessor, Bravely Second takes the classic turn-based JRPG and tweaks it. This time around however the story uncovers more dark truths about the world we thought we knew. Spoiler Free!

Bravely Second takes place two and a half years after Bravely Default. Agnès is now Pope of the Crystal Orthodoxy. On the day of the Crystal Orthodoxy signing a peace treaty with Eternia, they are attacked by a new enemy who takes her hostage. It’s up to a new character named Yew Geneolgia, a captain in Agnès’ Crystalguard, to rescue her. The story plays out like a book, with the game being split into chapters, with a narrator explaining details along the way.

In Bravely Second we have two new characters who join the fray. The previously mentioned Yew Geneolgia and Magnolia Arch, a Baal Buster from the Moon. They are joined with Edea Lee and Tiz Arrior, two familiar faces from the first game. Edea this time around is the captain of the Eternian Guard, and she helped Agnès pave the way for peace in their world. The group is tasked with stopping a mysterious new enemy and rescuing Pope Agnès, while uncovering the truth about the darkness that riddled their world. Agnès takes a back seat in this game and only offers you support much like Airy did in the first game. 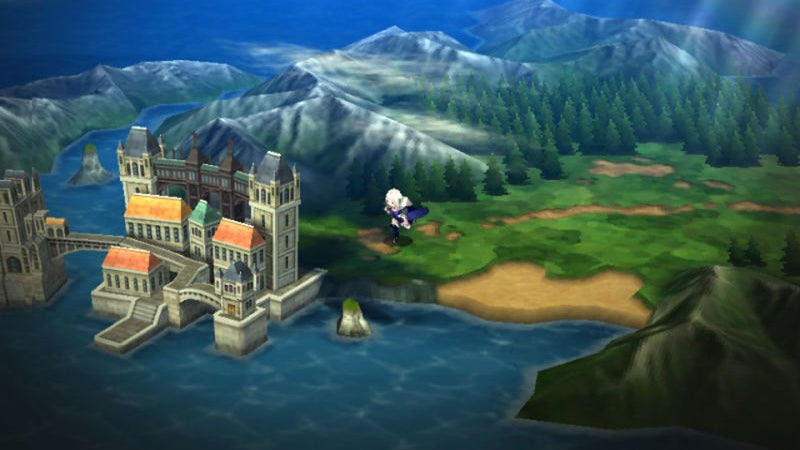 The game plays much like the classic Bravely Default: the player has a top down view of the world, and as you wander around the field,  a random battle occurs. Much like the first one, you can control the rate at which random battles happen. Your team also goes through dungeons, uncovering chests and items to get to the end and eventually fight a boss battle and progressing the story. As you progress, you go from walking, to a row boat, to an actual airship much like Grandship from the first, which makes side questing a breeze. Not to mention as you explore you’ll unlock warp piggies, which allow you to instantly travel between cities. A nice feature they brought back was the party chat system which allows the player to get to know the characters a little better.

The Job system is exactly the same as Bravely Default with a few exceptions: They lost the Archanist, Salve-Maker, Spiritmaster, and Spell Fencer jobs and added Yo-kai, Wizard, Bishop, Astrologian, Catmancer, and Hawkeye, just to name a few. With the additions of new jobs they added guns and new spells. My only complaint is that yet again I found a lot of the jobs almost useless. I found my four good jobs and pretty much stuck to them the entire time, only leveling up some jobs to get certain perks or abilities from them.

Battles are just like your typical turn-based JRPG, but with the same Brave/Default commands as in the previous game.  Defaulting makes you defend and gain Brave Points (BP) that you can store to take extra turns later.  Braving lets you take the extra turns that you stored, or you can brave without having defaulted first, but then you go into negative turns, which means you’re a sitting duck until you make up those turns! You get experience, Job Points (JP), and money for winning battles. This time around they introduce Victory Streak, which means if you defeat the enemy in one turn you can fight another battle which will multiply your exp, JP, and money. The only downside is that your Brave Points will not be restored by going into new battles during the Victory Streak, but you can do this as many times as you can until you run out of turns. If you’re like me and my friends, you find a way to have unlimited turns and master most job classes before chapter five.  During battles you can still  summon friends from different games to help you, and you can send your character using the Streetpass function on the 3Ds. They also brought back the feature called Bravely Second which stops time and allows you take a turn without actually using a turn. Doing a special attack during Bravely Second allows the player to surpass the 9999 damage gauge, which can be useful during a particularly grueling boss battle.

Fort Lune is the place that Magnolia is from and it was attacked and destroyed by Baals. This time you are to rebuild Fort Lune in place of Norende. You do this by using the Streetpass function on the 3Ds. Baals are new to the Bravely franchise and are huge monsters that you can weakened and fight to gain extra experience and Job Points. They play much larger roles later in the game.

Chompcraft is new to the franchise as well and works like a time-wasting mini game. The four main characters make toys and then you can sell them for money. The more money you make the more bonuses you unlock.

Visually the game is stunning as ever, sadly I wish there were more cut-scenes like the opening, but alas there isn’t. The backgrounds are beautiful and lush but again the characters are chibfied, which I didn’t mind, I know some do.  The soundtrack brings back a lot of tracks from the original Bravely Default, and it introduces some new ones. One of my favorite new tracks is the one that plays while fighting Baals. It’s eerie  and playful.

Overall I really enjoyed this game, I enjoyed it a lot more than Bravely Default. I was so happy to find out that I didn’t have to play through the same bosses over and over again. The story was compelling, and it was interesting to see the events that happened after the first game. It was also interesting to see how the Great Plague actually began and I didn’t even mind the new characters that they introduced; they were a good addition even though I desperately  wanted to know the fates of several other characters from the original. The game also felt easier than the first one. With the addition of Baals, gaining experience is a cinch, and the added Victory Streak, which chains battles for even more experience and job points, makes leveling even simpler. If you haven’t played the first Bravely Default, no worries: Bravely Second catches you up to speed in the first 15 minutes. It also hints at the end of Bravely Second that there may be another game in the works, and I hope that’s true. I’m not ready to see the end of Luxendarc (or rather I’m not ready to say goodbye to our main characters!), and I’ll be waiting patiently for the continuation. If you like games such as Final Fantasy III or Final Fantasy IV this ones for you!

+Not having to beat the same bosses 8 times

-Easier than the first

Bravely Second End Layer is available on Nintendo 3DS  and the Nintendo Eshop.

Sam Sarvis is an avid JRPG enthusiast and the writer for our Game of Thrones reviews.