What up geeks! We are half way through the season and this was probably one of the most emotional episodes to date.

This article contains spoilers, be warned.

The episode starts off with Sansa meeting up with Baelish in Mole’s Town, and  I’m sure he is telling more lies to her, and I’m also sure he’s not at all sad at what Ramsay did. He tells Sansa that her uncle Blackfish (aka Brynden Tully) has taken back Riverrun. It was so cringy when Sansa asked Baelish to describe what Ramsay did to her. Back at Castle Black, Sansa, Jon, Davos and the others try desperately to work out a strategy to beat Ramsay. They work out that they have to rally the other houses in the North to ever have a chance at beating Ramsay. Sansa tells Jon about Riverrun and how they can gain more support from their Uncle, she however lies about how she learns of the information. Does she not trust Jon? Jon, Davos, Melisandre, Tormund, Brienne and Sansa leave Castle Black and make for the South. I love the look Tormund gives Brienne while they are saddling up it was a nice comic relief to this heavy episode!

In Braavos, Arya is sent on a task by Jaqen to kill a local theater actress. While in attendance to gain knowledge of her target, Arya watches a play about the five kingdoms. It tells about the beheading of her father and about her sister’s marriage to Tyrion. This part of the episode made me so sad to reminisce about what happened to the Stark Family. It was also so angering to see Ned  Stark reduced to an idiot and have them mock his beheading. I think Jaqen was using the play as a tool to have Arya remember why she was seeking revenge, and maybe he knows that Arya will never truly be a faceless man. Arya learns about her target and asks Jaqen why she must kill the actress because she has done nothing wrong. Jaqen says that a price was paid and a servant does not ask questions.

On the Pyke, Yara Greyjoy and Euron Greyjoy make a claim for the Salt Throne. Yara says she’ll make a fleet so great that they’ll never be questioned again about their might. Euron not only tells them that he killed Balon Greyjoy but that he plans on going East and taking Daenerys Targaryen as his wife and bringing her back to Rule the Seven Kingdoms with his fleet. I was kinda freaked out by how much Euron looks like Theon, very good casting, amiright? All in All The Ironborn pick Euron to be their next king, but Yara, Theon, and those loyal to her take their best ships and leave the Pyke, which was for the best because Euron was going to kill them. Will they head East and find Daenerys themselves? It was also cool to see the drowned god ceremony.

In Vaes Dothrak, Daenerys learns the truth about Jorah: that he loves her and that he is infected with Greyscale. She tells Jorah to promise her that he will find a cure and that he return to her and be by her side when she takes the Iron Throne. Has Jorah been unfriend-zoned?!  Daenerys and Daario along with her army of Dothraki leave Vaes Dothrak.

Tyrion meets with another priestess from the Lord of Light, hoping that she will spread the good news of Daenerys. This is the same Priestess that Tyrion had spied when he was in Volantis. It’s very interesting to see how she knows exactly what happened to Varys and makes him so scared that he can barely speak to her. It’s also known that uprisings from the Sons of the Harpy have ceased for the time being since their negotiations with the Masters. 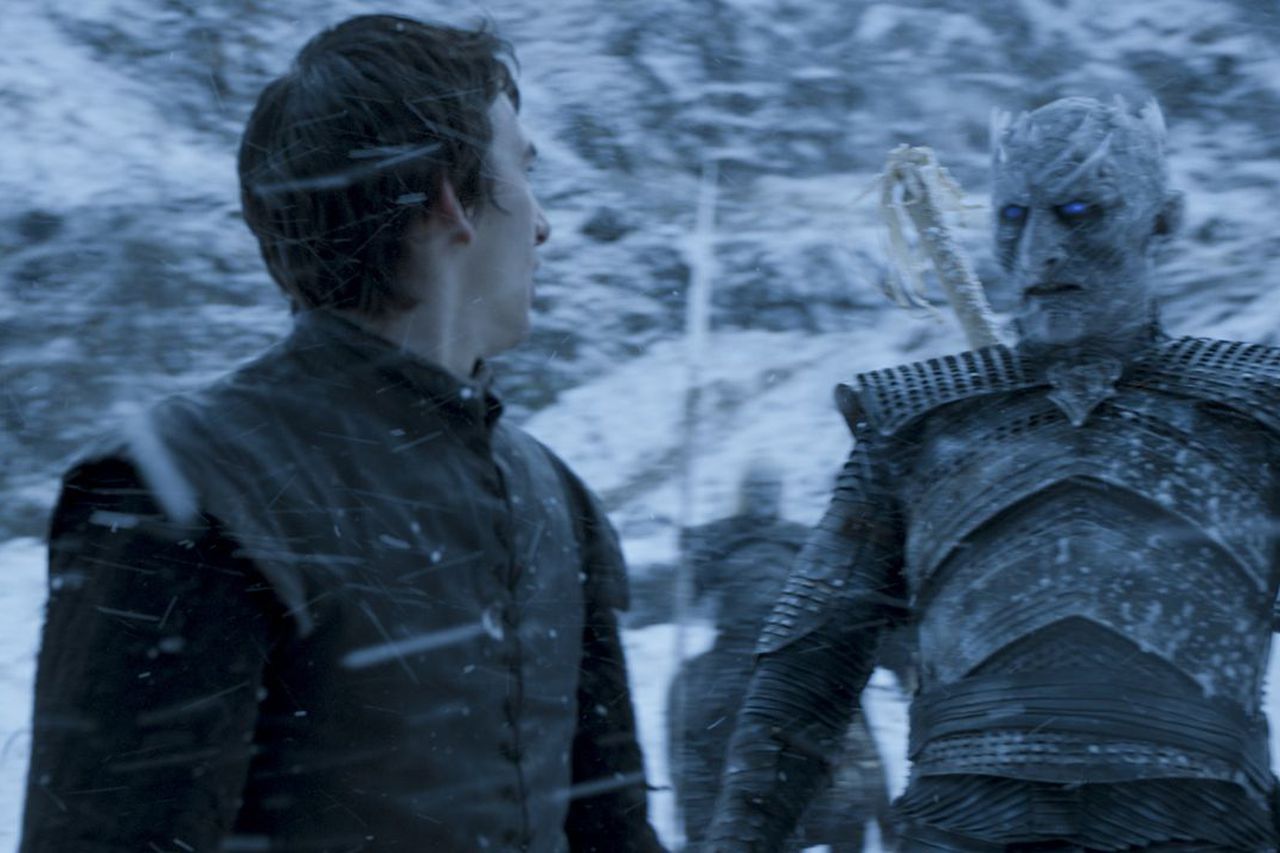 Beyond the Wall, Bran learns of how the first White Walkers came to be. The Children of the Forest made them to battle against the growing threat of the humans. While the Three-eyed Raven is doing his own time hopping, Bran touches one of his branches and is brought before the Army of White Walkers. He was walks through them unafraid and ends up in front of the Night King. The Night King looks in his direction and grabs a hold of Bran. Bran snaps awake and learns that he has been marked and that he is no longer safe by the Three-Eyed Raven’s magic and that the Army of Darkness is on its way to them. In his haste the Three-Eyed Raven must pass his knowledge to Bran before the army arrives and he takes Bran through his visions.

It was this part of the episode that I found it hard to get through, and it was still hard to get through the second time even though I knew what was going to happen. Meera along with Hodor start packing up their makeshift camp to evacuate. As they are packing Meera realizes that the temperature has dropped and runs to investigate. The White Walker army is upon them along with the Night King and his riders. Meera runs back and tries to wake Bran up but to no avail, she also tries to get Hodor to help her carry him but he’s gripped with fear. Their situation gets worse as White Walkers start falling through the ceiling of the cave. One by one their allies start falling to the White Walkers and Meera’s voice gets through to Bran. Bran is having a vision of his father leaving Winterfell, and in the background a young Hodor is cleaning up around the stables. Meera tells Bran that they need Hodor, so Bran wargs into him and uses Hodor to lift himself onto his sled so they can escape. During this escape, Summer, Bran’s Direwolf, sacrifices herself to give them more time.  They run down a long hallway being chased by hundreds of the living dead and Bran watches as The Three-eyed Raven is killed by the Night King in his vision. Meera and Hodor struggle to open the door but finally they manage to open it and get out. Hodor turns and shuts the door just as more White Walkers try pushing it open. Meera says one line to Hodor: “Hold The Door!” Hodor uses all his might and stands keeping the door closed as Meera runs off with Bran. Bran who is still in his visions sees the younger Hodor and hears the voice of Meera echoing through the castle grounds screaming “Hold the Door!” Wylis aka young Hodor, notices Bran and falls to the ground having a seizure while repeating “Hold the Door!” Over and Over again as it slowly starts fusing into one word Hodor. It doesn’t show him dying but we all know that he did. This episode was absolutely heartbreaking and it was the first episode that brought me to tears. I’m not sure if I’ll ever be okay with the death of the gentle giant known as Hodor, but we all know what he fulfilled his destiny by holding the door. Here’s to you Hodor.

Not much took place as far as story goes, with the exception of Bran royally screwing up and causing the deaths of everyone but Meera. With a heavy heart, Cheers Geeks until next time.

Sam Sarvis is a huge fan of #holdthedoor and will probably not be able to watch Episode 5 ever again.