What up geeks! Welcome back to my weekly review of Game of Thrones, this weeks episode they turned up the heat, quite literally! So without further ado lets get to it. Beware there will be spoilers!

For the first time in the history of Game of Thrones two Starks have finally been reunited!! I can’t tell you how happy I was to see the reunion of Sansa and Jon. It was so heartwarming and much needed. It starts with Jon being alerted of travelers coming in from the gates. Going to the Gates, he is finally reunited with Sansa. They eat and relax talking near the fire about everything; their families and their mistakes. Sansa asks where Jon will go now that he has given up his title as Lord Commander. He says that he will venture South, Sansa tells him that the only place they should be going is home. A home that is under Ramsay’s rule. Sansa tells him that if they don’t take back the North they will never truly be safe.

Davos confronts Melisandre about what truly happened to Stannis and Shireen. Before Melisandre can elaborate, they are interrupted by Brienne who tells them that she was the one who executed Stannis. While having breakfast, Jon and the others get a letter from Ramsay telling Jon to give back Sansa and that he has Rickon Stark. He taunts Jon telling him that if he does not give her back that he will ride North and kill everything and everyone that Jon loves. Sansa rallies Jon to reach out to the other families of the North and ask for aid in defeating Ramsay and taking back their rightful home.  I loved all the scenes at Castle Black but my favorite was where Tormund was giving Brienne bedroom eyes. XD

In the Vale, we finally get to see what Petyr Baelish, aka Littlefinger, has been doing all this time; You know, spinning his web of lies and deceit. He goes to Robin Arryn, the last remaining blood of House Arryn, and tells him that Sansa has been taken by the Boltons and is in danger. Robin says that they need to help her.  A small confrontation of sorts then occurs between Lord Royce and Baelish, which demonstrates how much power Littlefinger has in the Vale and who is loyal to his cause. He says that it’s time for the Knights of the Vale to get involved in the fray. What’s Baelish’s endgame?!?!?

In Meereen: Tyrion, Missandei, Varys, and Greyworm meet with the Masters of Yunkai, Astapor, and Volantis. The Masters tell Tyrion that they want Daenerys to leave Slaver’s Bay and go to Westeros. Tyrion tells them that the only compromise is this: Slavery will not return to Meereen and they will give the Masters seven years to abolish slavery completely. If they agree to these terms they will have to stop funding the Sons of the Harpy. Of course the slaves of Meereen are pissed that they are meeting with the slavers but Tyrion has to talk them down with help from Missandei and Greyworm., but both of them are furious for Tyrion for trusting the Masters but Tyrion knows that this is the only chance they  have at taking back Meereen. 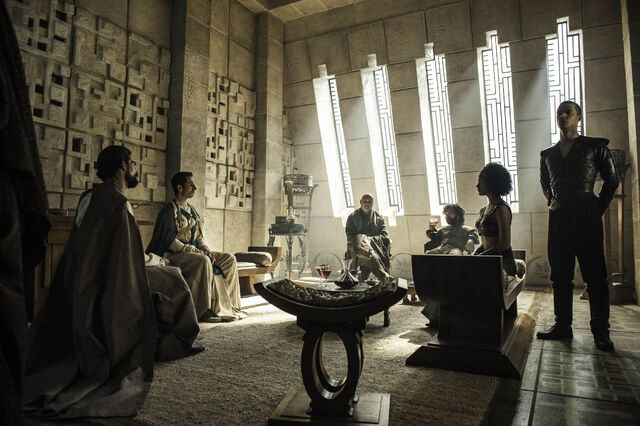 Ramsay has a little following out with a certain Wildling protector who was watching over Rickon. He tells Osha that Theon told him everything just before he stabs her in throat and lets her bleed out onto the floor. I was soo hoping that Osha would kill him.. but of course he wouldn’t die so easily.

In King’s Landing, Margaery is brought before the High Sparrow and he yet again he weaves her a tail of his past and how he got to be the way he is. She is then allowed to see Loras, who is all but broken.  She tells him to remain strong for their house.  It seems that she is still unbroken by the Faith Miliant.  Cersei goes to see Tommen and seek council with him.  She boots Maester Pycelle out of his chambers, who was talking to Tommen about being careful with dealing with the High Sparrow. Tommen tells Cersei that they have to be cautious when dealing with the High Sparrow because he has Margaery. Tommen tells Cersei that Margaery is going to make her walk of atonement much like Cersei did, Cersei relays this information to the small council (Olenna and Kevan Lannister) They devise a plan to stop the walk from happening. The Tyrells will storm the Sept before Margaery can make her walk and take her into custody. (Thus ending the Sparrows hold on Tommen) The only problem I’m having is this: When did Margaery agree with atoning for her sins? Is this a lie that the High Sparrow told Tommen or am I missing something? Did she agree to this so that she could get Loras freed? It seems that things are starting to work out in Cersei’s favor. If an all out war happens and the Tyrells lose a lot of men it could be the Lannisters that take back King’s Landing. I’m wondering if this is Cersei’s end game.

Theon finally makes his way back to the Pyke where he is greeted by a very bitter Yara. She’s still angry with her failed escape attempt to rescue him. Theon begs for forgiveness and tells her the only thing he wants to do is help her rule the Iron Islands.

In Vaes Dothrak, Jorah and Daario infiltrate the city and make their way to Dany to rescue her.  During their infiltration Daario finds out about Jorah’s Greyscale. Daenerys tells them that they have no way of escaping unscathed but she does have a plan. This was by far my most favorite part of the episode, it was like the producers knew how bored I was with Daenerys’ story. She is taken to the Doth Khaleen where the numerous Khals try to decide her fate. She tells them that she has no interest in doing what they desire but instead she will rule the Dothraki. They laugh and Daenerys pushes over a oil lamp starting a blaze inside the hut. She pushes more oil lamps as she watches unscathed as the fire consumes everything. The Dothraki rush to the hut and watch as she emerges unhurt and bow before her as the new ruler of the Dothraki. OMGGGG this was probably the most kick ass episode they’ve had in a long time. Now I know a lot of people are pissed about how Daenerys isn’t actually fire resistant, but honestly who gives a shit. It just makes her all the more badass.

I loved everything about this episode, it’s still building up and I can’t wait to see the War in North, the clash of Ramsay vs. Jon. I’m also pumped to see what’s going to happen in King’s Landing. We still have six episodes left people!! WOOOO!! Leave me a comment, What did you like, what do you wanna see, what are your fan theories?! Next week my other partner in crime Jeff Dugan will be doing the review! So cheers for now friends!

Sam Sarvis wishes she could be the Mother of Dragons but alas she’s only mother to an adorable puppy named Bear.