Hello Geeks and welcome back, it’s time we take a closer look at the second episode of season six titled: ‘Home’ This post is full of spoilers, ye be warned.

We finally get to see what Bran Stark has been doing all this time beyond the wall. It looks like his training with ‘The Three Eyed Raven’ has been paying off. He can now go back in time. Now don’t get too excited, he can see things that happened in the past, but he can’t change them or interact with them. He is taken back to a time before him to when his father was a boy training in the grounds of Winterfell. For the first time we get a good look at who Hodor was before he was well, Hodor, and we get to see a young Lyanna. Now this makes me wonder why they are introducing Lyanna – she must have some importance right? We do know that they go to war to bring her back when she was taken by Rhaegar Targaryen. Could this be a clue to Jon Snow’s origin? I’ve been saying it before and I’ll say it again. Is Lyanna Jon’s mother? But furthermore , What happens to Hodor to make him Hodor? What is the importance for Bran being able to go through time? All we know (and what they know) is that  war is coming.

In King’s Landing, Cersei is wasting no time using her Zombie Mountain to get rid of her enemies. However, she still lacks the power she had when Joffrey was King and is forbidden to attend her daughter Myrcella’s funeral by Tommen. Inside the Sept, Jaime confronts his son about not letting Cersei be there and Tommen goes on a long rant about not being strong and feeling terrible for letting all the bad things happen to his mother. Jaime tells him to go to her and ask her for forgiveness. They also talk briefly about trying to find Prince Trystane’s killers, which means that two of the Sand Snakes are currently lurking in King’s Landing!! (Is Tommen next on their list?) Jaime, who is still angry with the High Sparrow for treating Cersei terribly, has a small confrontation with him, going so far as to threaten him with death. The High Sparrow just smiles  and tells Jaime that even if he falls, there are enough people who will take over his claim and together they can overthrow an Empire. (Are they going to try to over throw Tommen?!) Meanwhile, Tommen goes and seeks an audience with his mother. He apologizes for being so weak and begs her to help him become strong. She of course forgives him and promises she will help him. Does she intend to make him like Joffrey and will Tommen start letting her dictate orders now that Margaery is still locked up?

In Meereen, Tyrion and the others talk about how Yunkai and Astapor have been taken back by the Masters. Tyrion inquires about the Dragons below the Pyramid and learns that they have both stopped eating ever since Daenerys left. Tyrion knows that if the Dragons remain chained up they will slowly waste away like their ancestors before them. So taking Varys with him he goes down into the depths of the Pyramid to unchain them. Surprisingly, they don’t maim or harm him as he goes and unchains them. As he’s leaving, he tells Varys to never let him do that again. The funny thing is if you watch when Tyrion is starting down the steps towards the Dragons, Varys’ facial expressions tell you that he thinks that this is the stupidest thing in the world to do. This was my favorite part of the episode.

In Bravos, Arya is beaten and bruised as she sits holding out her bowl for change. Her eyesight has still not returned and once again, she is beaten bloody by the Jaqen girl. (I’m so confused by who is who and what is what so that’s the name I’m giving her.) The real Jaqen comes to her and tells her that if she tells him her name, he will give her a place to sleep and eat. She denies having a name and he tells her that she will be a beggar no longer, and to follow him. (Oh man! Is her training finally beginning? Has she served her time?)

At Winterfell, Lord Bolton and Ramsay meet with Lord Karstark and talk about the impending war in the North. Lord Karstark tells them that they found a body where Sansa and Theon had gone and deduce that they must have had help and are probably on their way to Castle Black. Ramsay begs his lord father to let him go North and finish off Jon Snow. The Maester interrupts and announces that Roose is a father once again and that it is a boy. Ramsay congratulates him and stabs him right in the chest – he will not be second fiddle to another son. Ramsay requests that Walda Frey be brought to him. She follows him to the kennels where Ramsay reveals that Roose is no longer Lord Bolton, but that instead Ramsay is. Amidst her begging and pleading to let her go, Ramsay opens the doors to the kennels and lets the dogs consume Walda and his newborn brother. WOO Roose is dead that traitorous bastard, and damn this part was so dark and disturbing. I also like that Lord Karstark didn’t even flinch when Ramsay killed Roose, he was in on it! Does this mean that Ramsay is going to go after Castle Black and a sweet war between him and the Wildlings will take place?! I want Jon or Tormund to destroy him )

Sansa is finally is told about Arya’s fate and is happy to hear that she is alive and well. Sansa and Theon share another tender moment as he explains that he can never atone or ask forgiveness for the crimes that he has committed to the Starks. The only place he wants to go is home to the Pyke. On the Pyke, Theon’s father Balon Greyjoy is pushed to his death by his brother and in order to claim a new lord to the throne, they must have a Kingmoot.

At the Wall, Davos is still locked up in the room with Jon’s body. Upon nightfall Thorne keeps good on his promise and tells the men to come out of the room or there will be bloodshed. Fully prepared to fight, Davos and the others wait for Thorne’s men to break down the door but its a loud bang on the Gate to their keep that brings Alliser and the Traitors away. Enter the Wildlings with Tormund and Edd in tow! There’s a small scrum but the Traitors throw down their arms and are thrown into cells. (The part where the giant just picks up one of the guys and crushes him against a wall is amazing!) Tormund goes to see Jon and sadly says that he’ll have his men ready a fire for him. Davos seeks out Melisandre, (who I’m happy is still alive and not old,) and asks her to perform her miracles on Jon, however she doesn’t have any fight left in her. She is upset that the Lord of Light has never truly spoken to her. Davos tells her to screw all the gods, and to help do some good in the world by bringing back Jon and to believe in herself. (I personally love how Melisandre looks all disheveled, a lady who is usually so proper is shaken to her core.) Melisandre goes to Jon’s body and slowly starts washing off all the blood. She cuts his hair, throwing it into the fire, and chants over his body while placing her hands on his chest. It doesn’t work, Jon remains motionless and Melisandre tries the chant over and over again to no avail. Finally, Tormund leaves along with Melisandre, who looks upset all over again, and Edd follows. Davos sadly says goodbye to Jon and leaves the room. Ghost suddenly stirs from his nap and sits up, the episode ends with the camera panning up Jon’s body and he finally takes his first breath. YESSSS Jon is back from the dead! SO what does this mean, how are things going to change?! I can’t wait to see Thorne’s reaction and I can’t wait for next week’s episode!! 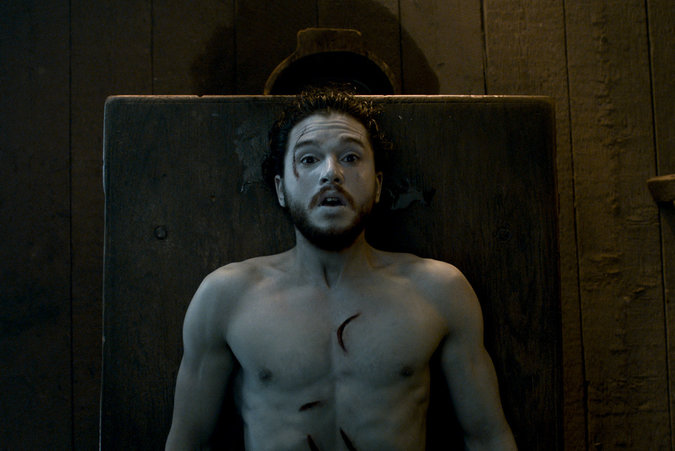 I liked this episode, I had a feeling that they were going to bring Jon back and I’m happy it didn’t take 8 episodes to do so. What were your thoughts? My final score for this episode is 9 out of 10.

Cheers Geeks, until next time!

+Tyrion and the Dragons

Sam Sarvis is a HUGE Game of Thrones fan, but would never like to live in Westeros.

Check out this season’s reviews of Game of Thrones episodes below:
The Red Woman Review