May the Fourth be with you, folks!

In honor of today being Star Wars day, I’ve decided to compile a short list of some of the best Star Wars tattoos I’ve ever seen.

Many people get tattoos to honor a loved one, or to remember someone or something special to them, and there’s no better way to commemorate being a geek than by getting a tattoo in the theme of one of your favorite movies, TV series, comic book series, or video games. My personal favorite kind of geeky tattoos are those having to do with Star Wars.

(Be aware that there are a few The Force Awakens spoilers below, although if you haven’t seen the movie yet, I’m not sure what you’re doing with your life.)

Let’s take a look at some of the most awesome Star Wars tattoos out there, all created by Buffalo-born tattoo artist Taylor Heald, who travels far and wide to share his artistic talent with others. 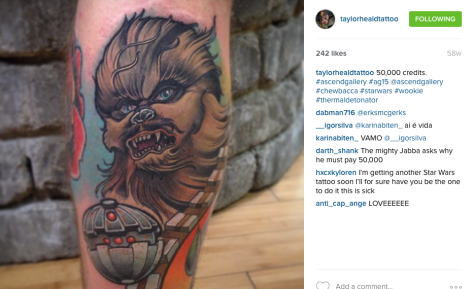 Chewie is a beloved Star Wars character, and everyone felt his pain during The Force Awakens when Han died and his best friend yelled in anguish. This tattoo does Chewbacca justice, incorporating details such as his iconic belt and fierce expression.

This has got to be the best rendering of a Tusken Raider I’ve ever seen. You can just see him shaking his staff above his head and yelling at you on Tatooine. 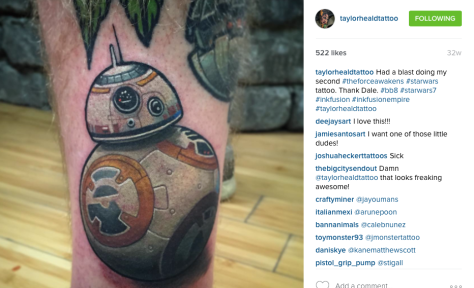 It didn’t take long for BB-8 to roll his way into our hearts, even before the premier of The Force Awakens. His human-like emotions are a huge part of what makes this character so well loved, especially because of scenes such as the one where Rey is fixing a part on the Millennium Falcon and BB-8 flashes Finn a lighter, appearing to be the equivalent of a human thumb’s up. This tattoo impressively shows the intricate detail of the droid’s orange and white armor. 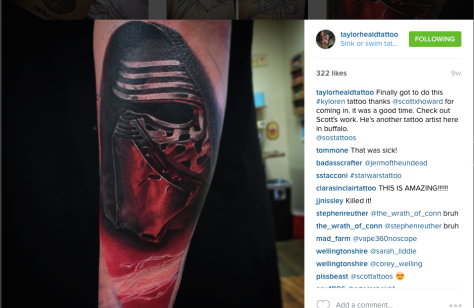 This piece is beautifully done and shows Ren’s affinity for the dark side in the red glow on his mask, reminiscent of the scene in which he kills his father, Han Solo. The detail makes it very striking, right down to the shininess of the reflective metal the mask is made of.

This is by far my favorite The Force Awakens tattoo. It is so realistically rendered and looks just as the mask does in the movie. The crumpled mask embodies Darth Vader’s place in the universe well, showing that it is crippled and broken because his character died in Return of the Jedi, but it is still around because Vader’s influence is not gone, as Kylo Ren has set out to “finish what [he] started.”

Although the three tattoos pictured at the top of the page did not make it into this Top 5 list, they are incredible works and have received honorable mention. (Seriously, Stormtrooper tattoos are badass.)

Check out more of Taylor’s work on his Instagram page, and make an appointment with him through his email address, Tmosestattoos@gmail.com.

What is your take on geeky tattoos? Do you have any, or are there any that you would like to get? Become part of the conversation by commenting below!

Jamie LeRoy is the Head Graphic Designer for The Geekiverse. She is currently trying to decide which Star Wars character she should get tattooed.