What up Geeks?! It’s hard to believe that it’s almost been an entire year since I’ve written about the crazy world that is Westeros. I don’t think it’s possible to forget everything that happened last episode but just in case, let’s do a recap.

Stannis, with help from Melisandre, burned his daughter, Shireen, alive so that the Lord Of Light may grant them passage to storm Ramsay Bolton at Winterfell. They were over taken, Melisandre abandons Stannis, and Stannis is ‘killed’ by Brienne. Brienne is still upset that Stannis has killed Renly. I’m still unsure of Stannis’ fate because they don’t show a body and it looks like Brienne was attacked before she could even finish him. Which by the way, I love how they show war in this episode: it’s not glorified, it’s terrible, cruel and graphic.

In Winterfell, Sansa uses the chaos from the ensuing battle to try and escape from her prison, only to be attacked by Ramsay’s lover, Myranda. Theon, finally growing a pair, pushes Myranda and she falls to her death. Sansa and Theon/Reek, partially redeeming himself, jump over the wall of Winterfell. (Who knows how long it will be, before Ramsay is chasing after them.)

Arya uses her new found information on Meryn Trant and poses as a young brothel girl to get him alone. Once alone, she stabs him repeatedly and kills him even going so far as to tell him who she is and that she was happy that the Many-Faced God left him for her. She goes back to the House of Black and White to return the face she has borrowed and is punished by Jaqen for disobeying him. Her punishment is losing her eyesight. I will say that this episode was absolutely brutal. The scene where Arya stabs Meryn in the eyes is one I won’t soon forget and I was right, Arya is still Arya and has yet to be no one. 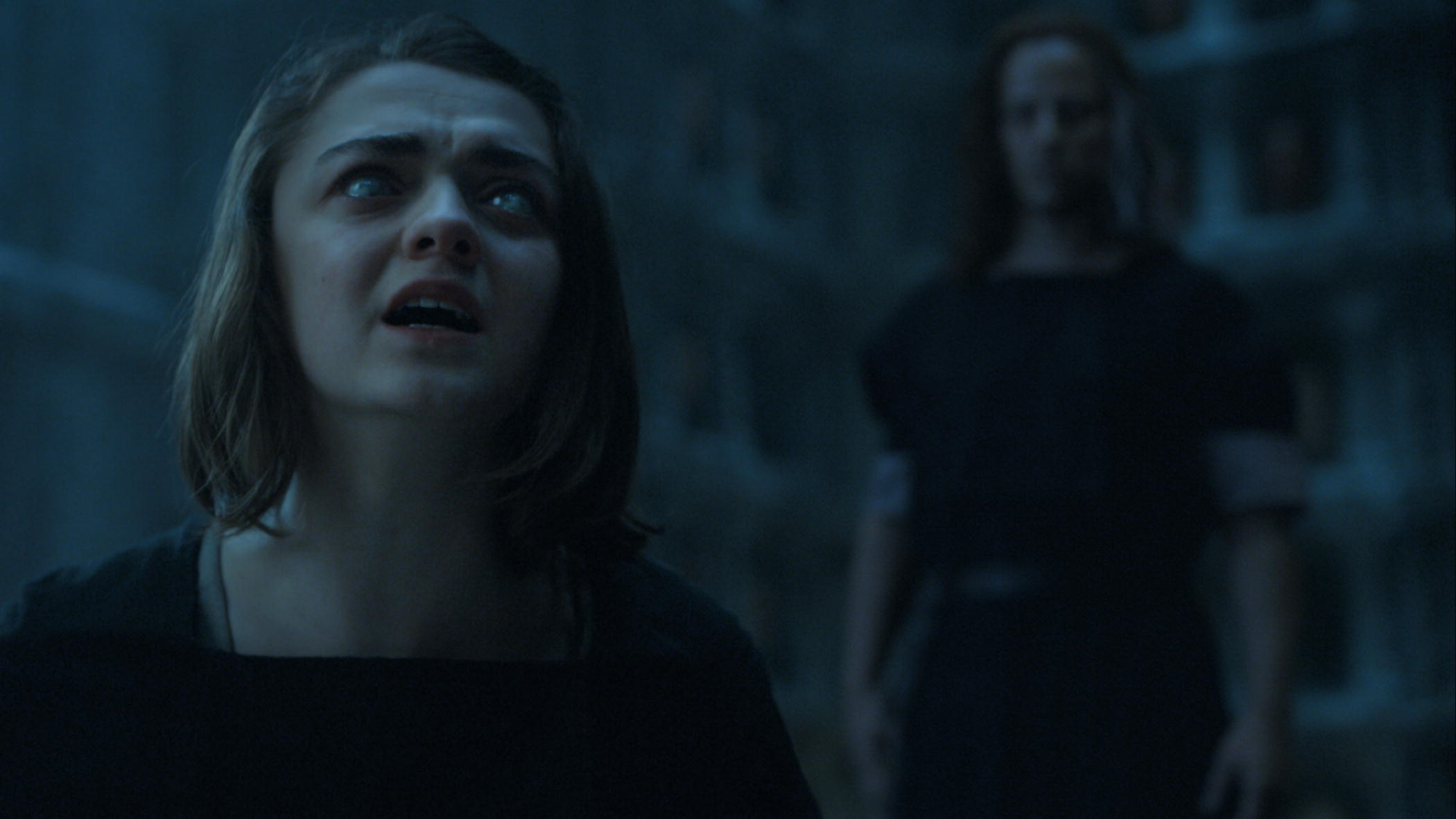 In Dorne, Jaime is departing with his niece/daughter to head back to King’s Landing. On the docks, they are seen off by the Sand Vipers and by Oberyn’s paramour Ellaria. She gives Myrcella a kiss before they leave, wishing her all the best as they sail off. Inside the ship, Jaime has a heart to heart with his daughter just before she falls to the ground, choking on the poison that she was given from Ellaria. It looks like the peace that Prince Doran was trying to obtain will never be solidified and if I was Jaime, I would have turned that boat around immediately and killed them all.

In Meereen, Daenerys is still MIA but good news! Tyrion, Jorah and the gang are alive and holed up in her palace. I was super worried about how she just left them to fend for themselves amidst all the uprising and havoc. Here, they strategize what to do next. Their plan of attack is for Jorah and Daario to track down and rescue the Queen and bring her back. Tyrion, Missandei, and Greyworm have to maintain order in Meereen and Varys appears in Meereen and gives Tyrion hints and support about ruling. On the outskirts, Drogon has brought Daenarys far away from the rebellion and right into the den of the Dothraki.

In King’s Landing, Cersei confesses her sins to the High Sparrow, who grants her to return to the Red Keep to await her trial. Cersei’s hair is cut and she is walked through the streets of King’s Landing naked to atone for her sins. Coming into the castle, she is greeted by what I can only describe is a zombfied Mountain. Seeing the Queen’s eyes as she looks out into King’s Landing, I can only guess that the people who have wronged her will suffer 1,000 times over. I can’t wait to see what she does, not only to the Sparrows but to the people of Dorne, who have killed her daughter. 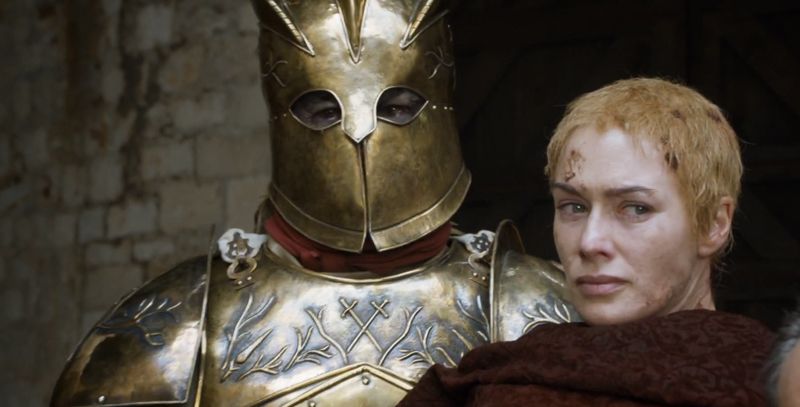 Jon, back from the horrors that he has seen from beyond the wall, learns that Valyrian Steel can only kill White Walkers. Sam persuades Jon to let him, Gilly, and Baby Sam go to Old Town to become a Maester, knowing that is all he’s good for and to protect them. However, Sam promises to return to Castle Black once his training is complete. Davos tries to appeal to Jon to send aid to Stannis in order to take back Winterfell, but Jon denies his request. Melisandre returns, letting them all know that Stannis has been defeated. Jon is told by the traitorous bastard named Ollie that a Wildling knows where his missing uncle is. Jon goes out to see this mysterious Wildling and is stabbed repeatedly by members of the Night’s Watch, who are still angry that he helped save the Wildlings. Jon is made into a pin cushion as the others let him bleed out into the snow. Part of me doesn’t believe that Jon is truly dead. I just can’t accept that fact, and I’m pissed that his Direwolf was nowhere to save him or act in his defense.

With everything that happened in this episode, I just can not wait for April 24th to get here. I’m so pumped and I need to know what happens with all the characters. Are they ‘truly’ dead? Will they introduce more characters. What’s really exciting too is this is the first season where there isn’t a book to give us an insight about what is going to be happening next. The show’s producers are now taking the show the way that they want it to go or the way they think that George R.R Martin wants it to go. Let me know what you think in the comments, do you think this season will be better then last year’s? Do you think Jon Snow is alive? Will Ollie get a knuckle sandwich?

I’ll be writing a small piece and breaking down the numerous trailers as they are released for season six. Until then, Cheers Geeks!

Sam Sarvis is a lover of all things Westeros and is waiting impatiently for April 24th stay tuned for her next Game of Thrones Article.