Tomorrow, we are getting a much needed sequel to one of my favorite 3DS games, Bravely Default. Bravely Second: End Layer  takes place three  years after Bravely Default. So if you’re like me you remember what happened right? Righttt? Well if not, here’s a little refresher.

In Bravely Default, the World of Luxendarc is in rough shape, the four crystals of power are corrupt and it’s up to Angès and her cryst-fairy Airy to purify them. Along the way, she meets a young man named Tiz whose brother was killed in a giant chasm, Ringabel a amnesic womanizer who relies heavily upon his journal, and the grand marshal’s daughter Edea, who just wants to do what is right. The four warriors fight against all odds to heal the crystals and save Luxendarc from the impending darkness even saying goodbye to loved ones. While thinking they are finally at the end of their journey to close the chasm, they are taken back to the start of their journey at the inn where Tiz first wakes up. As they continue on the path to purify the crystals over and over with the somewhat helpful advice of Airy, their hopes diminish in the never ending cycle. It isn’t until Ringabel regains his memories that their suspiciouns are true, that Airy is the evil one and that they’ve been being used all along. Airy has been going to countless worlds for over 1800 years trying to gain power for her evil god, Ouroboros. A plan set in motion from the great Sage Yulyana and the vampire DeRosso, the four warriors of light know what they must do to take down evil. Getting to the last world, the team must fight against Airy and then after, the evil god Ouroboros, who is doing all of this just to bring chaos to the Celestial Realm. After a helpful sacrifice from DeRosso and help from the other Warriors of Light, the gang finally beats Ouroboros and brings light to all the countless worlds. 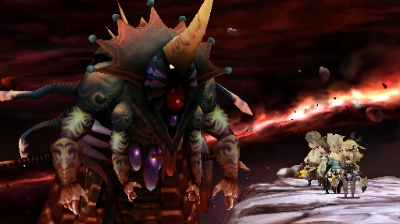 In the Epilogue, you see our heroes have gone back to their original worlds Edea with her parents, Angès looking after the crystals with her followers, Tiz in Caldisla with Egil and Ringabel saving a new group of heroes. It’s at the very end in which Tiz lets out the Celestial Being from his soul and collapses that we finally understand that the story is not complete and that their journey has just begun, and if you got the secret ending you’ll see a movie that sends you right into what I imagine is the beginning of Bravely Second.

Overall, I enjoyed Bravely Default, I loved the characters and the art, and I was happy with the job systems and the turn-based battle system which screamed Final Fantasy III. In a world of action RPGs, I was so happy to go back to the turn-based style play that I so desperately missed. I loved having the freedom of choice to do whatever job class I wanted, not to mention take as many turns as I wanted. The only thing I hated about Bravely Default was having to replay the worlds over and over and over again. It was boring and repetitive, which in all honesty I wasn’t used to in a Final Fantasy-esche game. One of my biggest pet peeves is playing a repetitive game like: Diablo or Destiny. I get it – you want the best loot or to play it for the increase in difficulty. I can’t. I play a game for the story and the characters and battling a boss seven different times annoyed me so much I put down the game. It took me months to pick it back up and then at that time, I forgot how the battle system worked and I forgot what my objective was. Which is why I was so concerned with Bravely Second. I know it’s been out for a while in Japan and I’m doing a lot to not spoil the game for myself, but if I have to play through the same bosses eight times again, I may return it.

Regardless, I will be picking it up and I can’t lie; I’m super excited to see what has happened to our characters after three years and I’m excited to see where the story takes us. I know they tweaked the battle system to make it even easier and they added even more job classes. I know there are returning characters such as: Edea, Tiz and Angès and they added new character such as Magnolia and Yew. If you haven’t yet and still want to get a taste of what Bravely Second is; there is a free demo on the Nintendo Eshop that will give you in-game bonuses if you pick up the full version of the game. So far what I’ve gathered from Bravely Second is that Angès has been kidnapped and Luxendarc is on the brink of war.Will our new heroes put an end to the chaos and stop the darkness for good?! We’ll know soon!

Sam Sarvis is The Geekiverse’s resident Game of Thrones nerd. Stay tuned for her coverage on the upcoming season here.