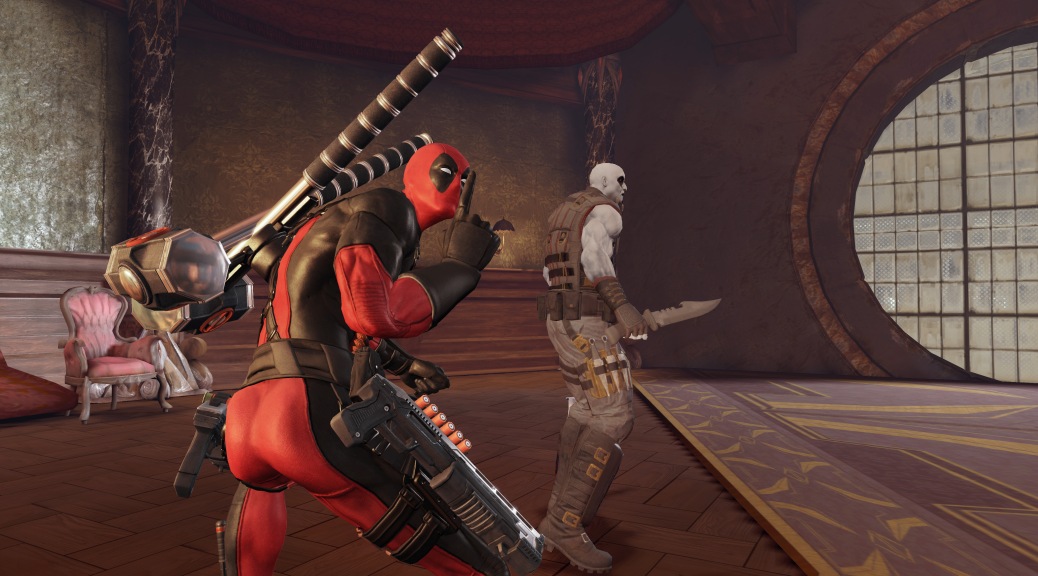 THE MERC WITH A MOUTH

Deadpool is an interesting Marvel character and until now, hasn’t received the most spot light. With 2013’s video game and the full-fledged movie on the way, it’s never been a better time to be a Deadpool fan. 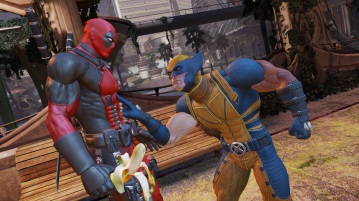 The game has its faults but does a good job of knowing that it’s not really a Triple A game. Developed by High Moon Studios, the writers took swings at themselves whenever possible a la Deadpool’s one liners. Voiced by Nolan North (Uncharted, Batman: Arkham City), who takes a few shots himself, the game is more fun than anything and after all, aren’t games supposed to be fun?

Deadpool succeeds because it didn’t have expectations. We’ve seen run-of-the-mill superhero games for a long time now, most being average to just plain bad (The Arkham games are a rare exception). Most of Activision’s Spider-man games are lacking and this fits right in that category, but has a better feel to it thanks to its approach. You play as (you guessed it) Deadpool, Marvel’s B-list superhero that is a total goof-off. The game is in the third person, with Deadpool often referencing the player (you) and chatting with his not one but two inner voices.

North does a good job of setting the game’s comedic tone. Most of his lines were ad-libbed, abandoning any sort of script that was previously laid out. The game (surprise!) takes jabs at this too. You start out in Deadpool’s beatdown apartment, running around with meaningless tasks like playing the guitar or petting your Dog. You receive a call to enlist in a video game that stars you, Deadpool. Shortly after, you take a mission to assassinate Chance White, a corrupt media mogul.

Over the course of the 8 levels (which lands around the 5 hour mark), you take on missions that blur together and stumble across characters such as Mister Sinister, Wolverine, Blockbuster, Rogue, Psylocke, Domino, and more. You visit the infamous Genosha and meet Cable. Cable has come from the future to ensure that Sinister’s destructive plan doesn’t pan out. You fight side-by-side on and off for a few missions with Cable, which helps to slightly change up the game’s otherwise repetitive nature.

The story plays out like a comic book, with descriptive boxes popping up at different times throughout the campaign. Without much source material outside of comics to go off of, this was a nice adaptation for High Moon.

The game mechanics were a nice surprise. The combat system felt like High Moon was aiming for an Arkham-like feel, but ended up more associated with 2012’s The Amazing Spider-man. They weren’t sloppy, but could certainly have been a little more responsive and tighter overall.

You are able to wield a sword (or hammer), a gun, and a grenade all at once. Switching between the three was a piece of cake. Finding ammo and Deadpool tokens was rewarding. The upgrade system was simple enough but could have used some slight tweaking. There are certain games where I don’t even want to deal with the upgrade systems due to a bit of over-complexity (looking at you, Witcher 2), but I was happy and eager to upgrade any chance I got. In addition, the player has many options of which direction they want to go; do you want to upgrade your health? Your gun? Your bonus points?

The parry option was frustrating at times because it was inconsistent. With a press of the “B” button on the Xbox, if successful, Deadpool blocks the blow and strikes the enemy. About 33% of the time, this did not work. One other portion of the controls that was a tad upsetting was the double jump. Sometimes, it was plain sloppy, which forced me to miss my intended mark. One feature I did find to be a positive was that the game rewarded head shots in a big way, whereas most comic book-based games do not.

Deadpool genuinely made me laugh more often than not with his quotes throughout the game. Sometimes, it was clear that lines were ad-libbed, but generally North was funny. Most of the lines were inappropriate for a family setting, so I would play secluded or when no one is home. Nolan’s 3-voice dynamic really added to the fun; the game featured his main Deadpool voice, his higher pitched inner voice, and his low bass tone inner voice. The 3 would often talk to each other and to the player holding the controller.

As I stated earlier, Deadpool often took stabs at High Moon Studios throughout the game. It’s almost as if they knew the game was going to just be average, but they ran with it and due to that awareness, I respected it more.

RUNNING INTO A WALL

Deadpool’s shortcomings were frustrating but expected, sadly. The game is really almost the ideal length for this kind of setting, clocking in around 5 hours. The unfortunate part is that the final 1.5 levels really drained any momentum. You are enlisted with fighting seemingly endless drones of clones. This would normally not be an issue, but the checkpoints chosen by High Moon were terrible. Half way through a level and need to power the game down? That’s great – you’re going to have to revert back to the last checkpoint, which was often 15-20% into the level. There’s no “save now” option. In the final level, I found myself increasingly frustrated as I would battle waves of enemies for 10-15 minutes, only to die and have to start over. No bueno.

The combat is satisfying, but not satisfying enough to repeat fight after fight. Enemy variation was pleasant, but it wasn’t enough to deter the repetition. Had this game finished up after the 6-7 level mark, I would have scored this higher. When it comes to games, bigger isn’t always better, though Deadpool might tell you otherwise.

I had fun playing Deadpool, a game that knows where it stands. I laughed throughout, but certain faults were too much to overlook. This game should have been worse, so I applaud High Moon’s production. I’m just glad I didn’t pay $60 for this.

+ The game doesn’t take itself seriously in the least.

+ Nolan North as Deadpool. We need more comedy in games.

– Inexplicable rise in difficulty in final mission and lack of checkpoints made for some frustration.

– Graphics are not all they could be for such a late game in the generation.

What is a hindsight review? It’s a reoccurring piece that we have created in which a Geekiverse writer reviews a game that they have never played before and is outside its launch window, which generally means a game that is 6 months or older.

Deadpool was reviewed on the Xbox 360. It is also available on Playstation 3 and PC.

Josiah LeRoy is The Geekiverse’s Senior Editor. He is super stoked for the Deadpool movie! You can still catch him on last-gen systems via Josiahislegend for both PSN and Xbox Live.

For all things Deadpool, gaming, and Marvel, keep it locked to The Geekiverse on Facebook and Twitter!