It doesn’t matter if you’re black or white.

Hello fellow geeks! In this episode of Game of Thrones we finally get to see our favorite little heroine, Arya! Daenerys gets an unexpected visitor and we see a small glimpse of Dorne. As always do not read on if you’re not caught up on the show.

The episode starts with our lost girl: Arya. Who is taken by boat across the narrow sea to the city of Braavos, where she is still unsure about what her lucky coin really means. Upon reaching the city she is then taken to a large building with a black and white door. She knocks on the door and an old hermit looking man answers. She shows her coin to him and asks for Jaqen, to which he replies that there is no one there by that name and closes the door on her. She waits what seems like days and finally frustrated throws her prized coin into the lake and goes to find food. After she successfully kills a pigeon, she gets harassed by a bunch of boys asking her what she has. Taking out Needle she stands her ground, but it is the sight of the old looking hermit that makes the boys flee. Arya surprised to see him goes with him back to the House of Black and White, where he reveals that he is indeed Jaqen. He tells Arya that she must become no one and leads her into the House of Black and White where she is probably going to become a bad-ass face changing assassin.

We come across Brienne and Podrick who are resting at a tavern. There Podrick spies Sansa and Baelish supping and enjoying some ale. Brienne tries to reason with Baelish and Sansa, but Sansa a now harden woman, sees the weakness and holes in Brienne’s sworn service and refuses her. Baelish seeing the potential threat Brienne poses knowing Sansa’s true identity has his knights go after her and Podrick. A fight ensues with Brienne and Podrick being victorious. After seeing Baelish and Sansa flee they decide to pursue them. 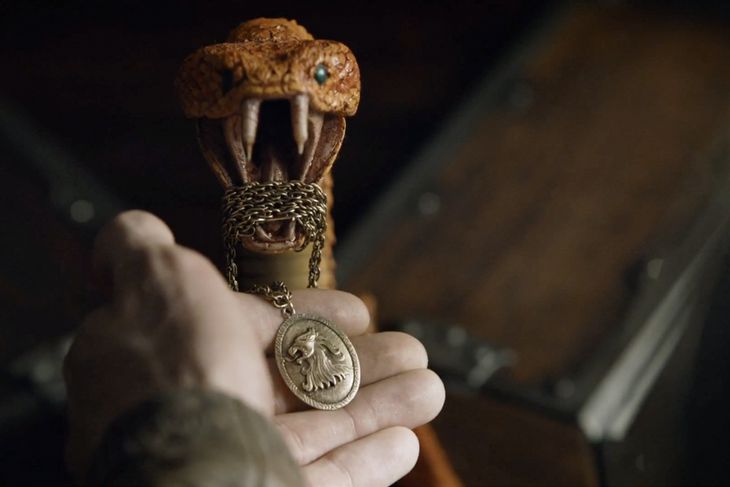 Back at King’s Landing, Cersei is sent a package from Dorne. The package contains a viper head with the necklace Myrcella owns. Scared for the life of their daughter, Jaime decides to go on a rescue mission and we finally get to see what became of Bronn, who the last time we saw was talking to Tyrion in his cell. Bronn is walking with his betrothed when he spots Jaime. Cutting through the formalities, Jaime tells him that he needs him for a secret task and that if he helps him he will give him a prettier girl and an even bigger castle. Bronn seeing the parchment that voids his marriage to Lolly’s has no choice but to accompany Jaime to Dorne.

Things however are still not going well for Cersei and honestly everyone is fed up with her bullshit. Kevan Lannister in particular, is tired of her masquerading around as the “King” and tells Cersei that he’ll be waiting in Casterly Rock if the real king shall ever need him. Kevan Lannister is Tywin’s brother and Lancel Lannister’s father.

Finally in Dorne we see how things are going for the Martell family. Oberyn’s lover Ellaria Sands, is still very bitter about his death and goes to his brother Doran Martell, to purpose revenge for him. She wants to ship Myrcella back in pieces to Cersei, But the prince will not hear it, Myrcella is innocent in all of this and he will not kill a child for revenge. Outraged, he is threatened by Ellaria and she tells him that the Sand Snakes will not wait around for justice.

We catch another glimpse of what is going on with Tyrion and Varys on the road to Meereen. Varys talks about how good at ruling Tyrion was when he was the hand of the king. Tyrion agrees and says that that was one of the reasons he stayed in King’s Landing was because he enjoyed ruling. Varys however continues on saying that no matter how good they are at ruling they will never be the figure head that is needed for Westeros, the public will never love them which is why they need Daenerys.

At the wall there is a small reprieve where Gilly is learning how to read from Stannis’ daughter. She talks a little about the Greyscale that she has on her face, not remembering how it was treated. Gilly then briefly remembers what happens when it is left untreated and what happened to her sisters who became feral and covered in scaly skin and were most likely killed by Crastor or the White Walkers. Gilly, Sam, and Shireen are interrupted by Stannis’ wife who is cross with her daughter for being kind to the Wildlings. And remember what I said about Jon showing Mance mercy last episode and it would be looked at as treason? Well Stannis is unhappy with Jon’s involvement with his death and is trying to figure out a way to punish him. Instead, Stannis shows him leniency on the condition that Jon help take back the North and fight in Stannis’ name and he will then make Jon Snow, Jon Stark. He also tries to persuade Jon further telling him that Alliser Thorne is cross at him for making him look weak in the eyes of The Watch for going to Mance on his own. As much as Jon would love to be a Stark he ultimately decides against it. Tensions run high in The Night’s Watch when they start voting on Lord Commander. It seems that Alliser Thorne is the clear choice until Sam steps up and nominates Jon. The voting comes down to a tie until Master Aemon adds his vote making Jon the new Lord Commander of the Night’s Watch much to Jon’s amazement. 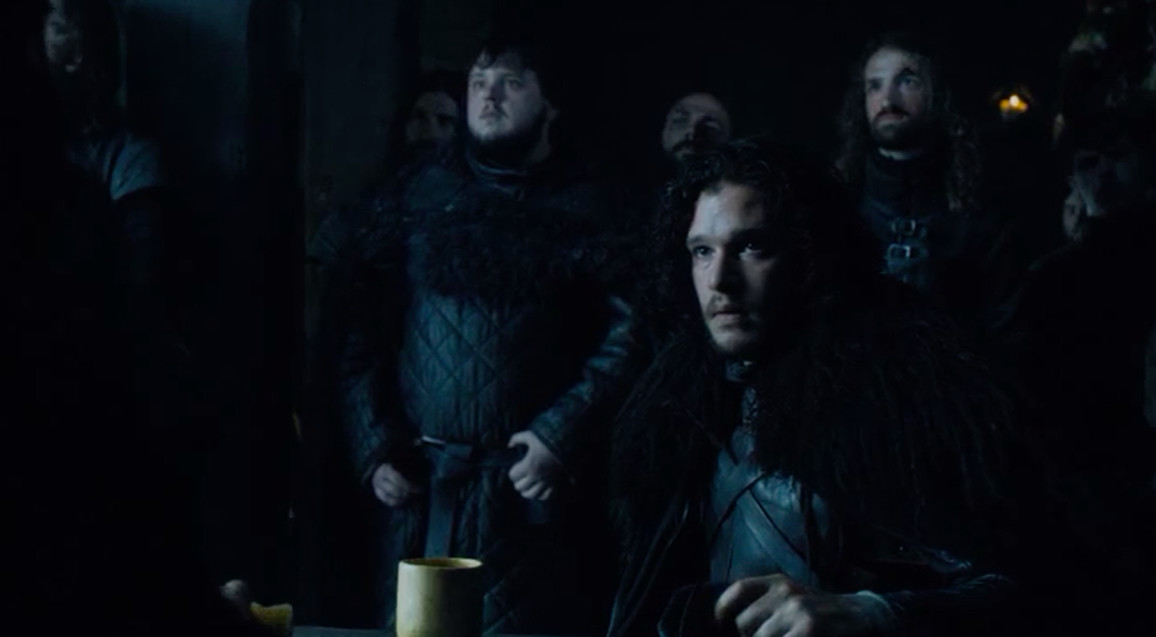 In Meereen the Unsullied and the Stormcrows are on patrol to find the Son’s of the Harpy. Daario and Grey Worm bring one to her and Barristan worried about Daenerys’ future as ruler, gives her advice about what she should do to maintain law and order. Daenerys decides to give the man a fair trial. This doesn’t go over well with the one of the free slaves and he kills The Son’s of the Harpy thinking that this is what Daenerys would have wanted. This puts the Mother of Dragon’s in a difficult position since she could either let the former slave go and feel the wrath of the former masters or kill him and feel the wrath of the former slaves. Coming to a decision, Daenerys has the former slave publicly executed, and this starts a widespread riot pitting former slaves against former masters. Feeling overwhelmed Daenerys retires to her room where she is briefly reunited with Drogon, who flies away leaving Meereen and her behind.

I feel that this episode was a shade better than the first one. I really love seeing Jaime and Bronn being reunited and I hope that their ‘adventure’ to Dorne will be very eventful. This also never happens in the books which is keeping me very interested. I really love the show in this aspect because I feel like it’s not beating around the bush. It gets right to the point like: The old guy at the House of Black and White that’s Jaqen. Brienne is looking for Arya and Sansa and she finds them. It just keeps me constantly entertained and at the edge of my seat. I’m also so curious about what other changes they’re going to do. I love what they’re doing with Daenerys’ story. You just feel so bad for her being caught up in a whole political game where one step forward is two steps back, but Meereen and all of Slaver’s bay will be a good lesson for her if and when she makes it to Westeros. I also love Varys’ conversation with Tyrion about them being in the shadows while someone else rules, he doesn’t sugar coat that they are unloved by the public. Which makes me wonder if Varys’ plan for Daenerys is to have Tyrion be her adviser. I’m excited to see Arya become a bad ass assassin and I love that her list of people she wants dead is slowly getting smaller and smaller. I’m happy to also see that Jon was made Lord Commander and I’m curious if he’s going to be getting any backlash from Alliser Thorne or any of the other men from the Night’s Watch. I still can’t wait to see the Sand Snakes.

So with all my ramblings done. I would have to give The House of Black and White a 8.5 out of 10. It wasn’t a solid 9 but it was too strong to be a 8. It was a little slow but I can finally see the wheels turning and I can’t wait for the build up and what’s going to happen in future episodes. That’s all for now Geeks, drop me a line and let me know what you loved or hated about last Sunday’s episode. Cheers!

One thought on “Game of Thrones: The House of Black and White Review”