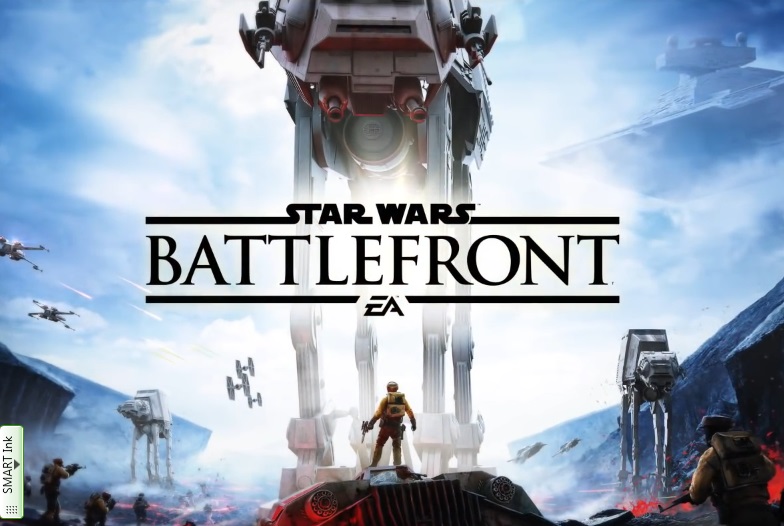 What a week it has been for Star Wars fans!  First we were treated to the amazing second trailer for Star Wars: The Force Awakens (you can read Josiah’s break down of the trailer here), and now we’ve been graced with the first trailer from EA’s upcoming Star Wars Battlefront!  Here are some of my first impressions of the trailer, which is located at the end of the article in case you haven’t viewed it yet.

First of all, the graphics.  Wow.  The Frostbite 3 engine is obviously putting in some work here, and it shows.  The forest moon of Endor looks absolutely stunning.  At some times in the trailer, it’s hard to tell whether or not you’re looking at real footage.  I showed the trailer to a couple students in my room, and, as they looked over my shoulder, they all said, “This doesn’t even look like a game.  They look better than the movies!”  I couldn’t agree more.  My eye was drawn to the beautifully rendered foliage and explosions, especially when AT-AT and AT-ST were destroyed.

We see some interesting gameplay elements in the first 1:20 on the trailer.  When under fire by an enemy AT-ST, some rebel troops deploy a very Gungan-esque force field to absorb some damage.  Then, one of the rebels pulls out a rocket launcher, uses a jetpack to jump high into the air, and pulls off a beautiful AT-ST headshot.

Before being able to celebrate for too long, as an AT-AT emerges, lumbering its way through the forest, its steps kicking up debris from the forest floor.  The rebels waste little time and call in an airstrike, and seconds later, Y-Wing fights swoop across the sky, raining laser fire on the AT-AT, which explodes in a delightfully detailed burst of fire and shower of sparks.

As the dust settles and the rebels begin to collect their wounded, there is a moment of quiet.  A moment which is soon permeated by a familiar-sounding breathing.  A gloved hand extends, holding a lightsaber.  The lightsaber ignites, and a red blade extends with a menacing hiss.  It’s Vader, baby!

The trailer then goes into several quick cuts of many locations and playable characters.  First, we see Snowspeeders skimming the surface of a Hoth.  Then, an X-Wing takes out a TIE fighter while flying through a canyon that is photo-realistic in its insane detail. Next, Boba Fett is seen using his signature jet pack, soaring over the desert dunes of Tatooine, opening fire on troops below him.  Lastly, TIE fighters are seen flying out of a hanger into the skies of Sullust, where they are engaged by the ship that made the Kessel run in less than 12 parsecs: The Millennium Falcon.

Every time I watch the trailer, I get jittery with anticipation.  The photo-realistic worlds, the familiar sound effects, the possibilities!  Unfortunately, it has been reported by PC Gamer that there will not be any space battles, with the team opting to focus on “. . . epic planetary battles.”  These planetary battles had better indeed be epic!  Based on what I’ve seen in this trailer, it looks like DICE is ready to deliver.

I’ve been a Star Wars fan ever since I was a little kid.  Unfortunately, I missed the original trilogy’s theatrical release by about a decade. I don’t have most of the issues with the prequel trilogy that many people do, so I did really enjoy them, but this new movie has put me on an entirely new level of stoked.  We get to experience all the hype that goes along with a proper Star Wars theatrical release!  What an exciting time to be a Star Wars fan!

Andrew is a Geekiverse editor and its first Sith.  He is locked in a never ending battle with Josiah, who is always underestimating the power of the Dark Side of the Force.  PSN and XBL: FeirlessLeider.

For everything Star Wars, including Geekiverse’s upcoming Summer of Star Wars, keep it locked to Geekiverse on Facebook and Twitter.