Telltale produces some of my favorite series in gaming. As a gamer who loves story above all, The Walking Dead and The Wolf Among Us have quickly become two of my gaming obsessions.

2010’s Playstation 3 exclusive Heavy Rain paved the way for a new type of decision based gameplay, where action is mainly controlled via quick time events. The Wolf Among Us has truly hit its stride in Episode 3. Where the first two episodes played more of an introductory setup, Episode 3 was about action. As Bigby’s investigation continues, more and more suspects arise. I thought Ichabod Crane was the murderer from the start and he may yet be. But I still can’t be certain. 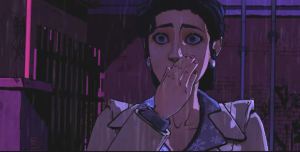 Early in the 90 minute story arch, a funeral takes place that features most of the characters we have met so far. Right from this point, many of the timed decisions feel vital to the story. Whereas most decisions felt mainly aesthetic previously, the ones in Episode 3 felt as if they will carry a lot of weight. Time moves quickly in this episode, so multiple playthroughs are necessary if you want to fully explore everything. In certain areas (like the Witch’s apartment), there are so many details hidden and in plain view, it is easy to miss certain objects.

The relationships that are established give the decisions their weight. If I choose option A, will I hurt my relationship with Snow? If I choose option B, will I make my life more difficult in Episode 4? What are the consequences of my choice? This is where The Wolf Among Us succeeds. Telltale has created another world of characters that I either care about or despise. They feel like living, breathing, reactionary beings. In the episode’s final moments, Bigby’s true power as a Fable is used and boy does it feel empowering. At the same time, I felt helpless. The new antagonist that is shown leaves more questions than answers, leading up to a fantastic cliffhanger that leaves me craving Episode 4’s release. I cannot wait to see how this new character’s path plays out.

The Wolf Among Us Season 1 is on my list of Game of the Year Contenders and Episode 3 proves that it belongs in the conversation.

One thought on “The Wolf Among Us Episode 3: A Crooked Mile Review”