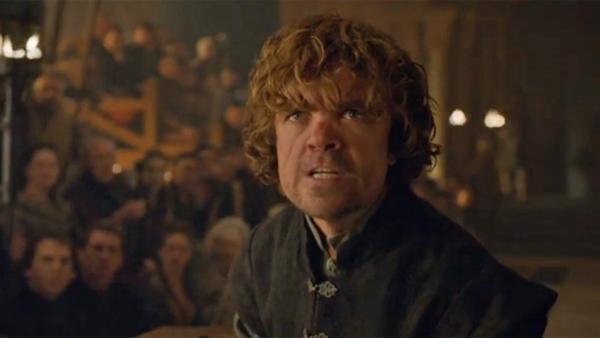 WARNING SPOILERS!! Do not read if you are not caught up!

As we often know with Game of Thrones, each episode looks into the lives and happenings of each main character. This week’s episode we got a glimpse into what was going on with Daenerys in Meereen, Theon at DreadFort with Ramsay, Stannis and Davos in Braavos, and Tyrion being put on trial in King’s Landing.

For the first time in the series we get to see what Braavos looks like on the screen. The giant statue of the Titan of Braavos as Stannis’s ship passes underneath, captures what the book described perfectly. We also get to see the almighty Iron Bank of Braavos as it is only hinted at in the books. Stannis and Davos go to Braavos to request a loan so they may get ships to take back the Iron Throne.

In the next scene we are taken to DreadFort where Yara or (Asha) has taken her fastest ship to get her brother back. Theon, not even recognizing his own sister, fights her, as he has already become completely consumed by the alias Reek. “Not Theon, I’m Reek! Reek! My name is Reek!”

A short battle ensues between the Ironborn led by Yara and Ramsay’s men, (With Theon running back into the cage where she found him). Yara realizing that she will not make it out alive if she had to drag Theon back, gives up on him and goes back to the boats telling one of her men, “My brother is dead.” I won’t lie; any scene with Ramsay makes me cringe. As I watch his exchanges with Theon and having read all the books up to a Dance of Dragons I find all of their interactions new, which makes me second guess what’s going on. Seeing Theon getting into the bath that he was rewarded with, for not leaving with Yara, makes me wince as I see all the scars that Ramsay has inflicted upon him. Their small master and servant scene ends with Ramsey asking ‘Reek’ if he’d like to play a little role. He wants him to pretend to be Theon Greyjoy.

We are then taken to Meereen where we finally see what the dragons have been up to without their mother. 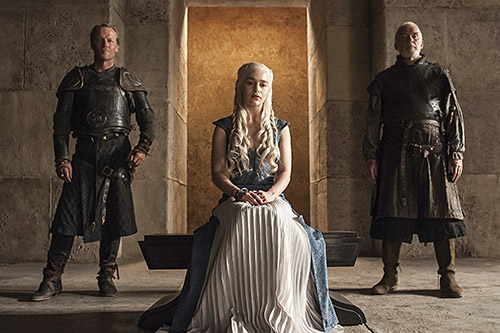 Daenerys is finally playing the role of Queen of Meereen sitting on her throne and listening to the outcries of her people. Having answered “Injustice with Justice” we get a taste of what her justice has done to one of her subjects. A young man pleads to her that his father be taken down from the post he was nailed to, so he may have a proper burial. His father was one of the few masters who were opposed to nailing children to the posts outside of Meereen. “Is it Justice to answer one crime with another?” We see that maybe Daenerys nailing all the masters up was probably not the best thing, and that maybe she should have heeded the words of Sir Barristan by giving mercy. Her discomfort is very plain to see especially after agreeing to let the son bury his father and then asking how many more people have come to see her. “212 subjects my grace.” Being a queen is never easy.

The episode then makes it way to King’s Landing where the small council is meeting before the trial of Tyrion. Having Prince Oberyn on the council is like a breath of fresh air. His attitude and demeanor are such a difference to that of Mace Tyrell who is constantly trying to kiss Tywin’s behind with praise. (His casting is top notch and brings a whole new life to the character). At the small council they discuss the threat that Daenerys is with her army, her dragons, and two seasoned warriors (Barristan Selmy and Jorah Mormont). Here we learn that final truth that Mormont was spying on Daenerys on behalf of the Iron throne, but does so no longer.

A scene takes place between Varys and Oberyn in the throne room where Oberyn starts questioning Varys about his past and his motives. As the scene draws to a close we can only guess what Varys’s motives are: The Iron throne.

Finallllyyy the trial!! Tyrion is taken to the throne room which has been set up as a small courtroom for the murder of King Joffery. As the accusers take the stand spreading their accusations (some out of context, others pure lies), it looks very much like Tyrion is definitely going to be found guilty and watching one of your friends stab you in the back is going to knock you down a peg. As the court adjourns we see how much Jamie Lannister cares for his baby brother. Jamie goes to his father knowing full well that Tyrion is going to be found guilty and plans to give up everything for him. He tells Tywin that he will give up his gold cloak and go back to Casterly Rock where he will rule over the lands as his son and heir. Tywin agrees immediately telling Jamie that he was never going to have Tyrion executed but instead have him take the black. But! It’s tooo late! Jamie already walked into this trap and now has to go through with his agreement only ‘if’ Tyrion admits he is guilty and takes the black. Tywin you crafty Son of a @#$%&. We go back to the ‘courtroom’ where everyone is waiting for the next round of accusers. Now, this entire time Tyrion has been taking all of their lies and false words with little more than contempt and a smile. It isn’t until the next witness that his mood takes a 180 and his face melts into one of pure devastation. The next witness is his mistress Shae. Now if we remember from a couple episodes back he completely renounces his feelings for her trying to hurt her to save her. This is where the trial goes south for Jamie and for Tyrion, who overcome with grief and bitterness at the woman who betrayed him, goes into one of the best speeches I’ve ever heard from a TV series.

Being defeated by the lies that his former lover tells, Tyrion wishes to confess. He reveals that he didn’t kill Joffery and goes into a monologue about how he’s been on trial his entire life for being different and that he should have let King’s Landing fall to Stannis during the battle of Blackwater Bay. He also wishes that he had killed Joffery because he was a terrible human being, but more than anything he doesn’t want to die because his nephew was a monster,

“I will not give my life for Joffery’s murder and I know that I’ll get no justice here. So I will let the God’s decide my fate, I demand a trial by combat.”

AND poof! Tywin’s plans and Jamie’s plans just went up in smoke. Peter Dinklage’s performance was the best so far this season, you know, besides Jack Gleeson’s (Joffery) choking scene. If he doesn’t get an Emmy I’ll be very disappointed.

This episode had a lot of substance and I just can’t wait for next Sunday! I may be a little generous but there was nothing wrong with this episode 9.5/10.  See you next time in Westeros boys and girls!

+Oberyn for being hilarious

-Shae is a lying whore

One thought on “Game of Thrones: The Laws of Gods and Men Review”